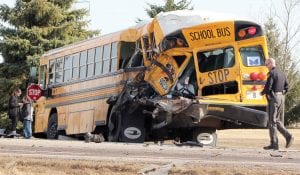 The aftermath of the collision between an Archbold school bus and a semi that occurred Wednesday, March 27, on US 6. Top and at right: The wreckage shows the bus was hit on the left rear corner. Bottom: The semi truck cab was torn off the frame by the impact.– photos by David Pugh

After a semi truck struck a stopped Archbold school bus, Wednesday, March 27, many were critical of the truck driver.

After photos and security camera footage of the crash were published on the Archbold Buckeye Facebook page, many of the more than 800 comments either singled out the driver involved in the accident, or truck drivers in general.

There were calls for more testing of semi drivers and stiffer penalties for traffic violations.

“How… do you drive a dump truck, or any vehicle for that matter, and hit a school bus? … It’s big and yellow, what don’t you see?” one commenter said.

You would think if anyone would figuratively want the truck driver’s head on a platter, it would be Rachel and Dustin Buehrer, parents of sons Clayten 9, and Kelby, 6, who had just stepped off the bus when the crash occurred.

But you would be wrong. 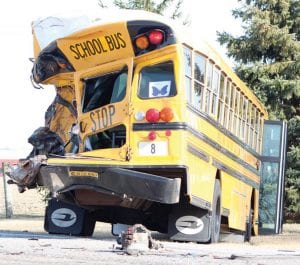 “I don’t think anybody could have done anything better defensively to prevent it (the crash), and we don’t know the truck driver’s situation,” said Rachel.

“The only thing it seems it could be was some sort of distracted driving.

“Everybody does it. No one can say they’ve never once taken their eyes off the road, that they never looked down to change a radio station, turned around to see their kids in the back seat, looked out and saw some deer standing in the field or something.”

She said it was really sad to see some of the Facebook posts.

Dustin said, “Part of that comes from the fact that we farm. We have semis.

People, Dustin said, “don’t understand what he (Kelly Braden, the truck driver) does for a living.

“When you’ve done it, when you’re in somebody else’s shoes, you understand that a little bit better.

‘”It doesn’t change the fact that it happened. We’re just grateful that it turned out the way it did. It could have been much worse.”

Rachel said while she was watching the accident investigation, and later, cleanup, she said the (emergency) vehicles have LEDs (lightemitting diodes) in their emergency lights “that you can see from miles away.

“Even the snowplow trucks have these LED strobe lights that you can see bright as day, for at least two miles.

“Why don’t our school buses have them?”

Dustin said, “They’ve got $3 worth of light bulbs on the back of a the bus to try to alert people when there’s thousands of dollars worth of LEDs on a cop car or a fire truck.

“I don’t mean to sound like that’s ridiculous. We support that. We just like to see more of it.”

Triple 6 Outdoor, the family business, has a security camera pointed toward St. Rt. 6.

Dustin explained the cama era is activated by a motion sensor, but only records when triggered by something closer to the house.

It is set to filter out activity on the highway.

So it was just by chance– a bird, a cat, a rabbit crossing the sensor’s line of sight– that the camera was recording when the bus stopped to drop off Clayten and Kelby, and when the accident occurred.

After discovering the crash had been recorded, Dustin said at first, he wasn’t going to post the video to Facebook “because it wasn’t just us involved. There were other people involved.

“But the reason I ended up deciding to, was that nobody was seriously injured, and, if anything, maybe it could be something to raise awareness and maybe save somebody else’s life.”

Dustin said he spent the day with different news agencies from across the country.

He said the media people he spoke with were “pleasant to work with.” Emotional Impact

“They have bumps and bruises and are still a little scared, but we are glad no one was seriously hurt,” he said.

Were Clayten and Kelby Buehrer upset by what had happened, or could have happened, to them?

Rachel said, “Their cousins were here. Once things started to calm down, they were riding their bikes, out in the barn playing with the cats, and in the house getting a snack.”