Bud & Gert Hitt Were On Target In Archery World 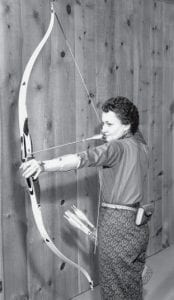 Gertrude Hitt, champion archer, draws her bow. She was active in the sport in the late 1950s and 1960s. – courtesy photo

Bud Hitt, 83, Archbold, who is retired, remembers what a sharpshooter his wife Gertrude was with a bow and arrow.

Bud and Gert specialized in building bows and arrows for many years in Archbold. Their product was in demand from all corners of the world.

It is possible to say that the bows they made were some of the best on the earth.

Gert said the pair was running a restaurant, “Gert and Bud’s,” and Bud began making bows by hand in the back room.

What made Hit bows special were their designs, accuracy, and the speed with which they could launch an arrow. Bud was the first one to introduce many new innovations.

Over the years, they added one employee, then a few more.

“He was always making new models, and he would come to me and say, ‘I want you to shoot this bow,’ said Gertrude.

One Of The Best

When she was active in archery in the late 1950s and 1960s, Gertrude was one of the best archers on the planet. She won 11 state champion- ships in Columbus, plus one international open competition in instinctive archery- archery without the aid of a sight on the bow. 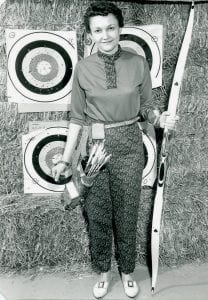 Gertrude Hitt, in a photo taken when she was active in archery. Her husband, Bud, manufactured bows until 1975 or 1976; now the retired 83-year-old Bud makes golf clubs. Gert admits that even today, at 80 years of age, she still occasionally “gets the itch” to shoot her bow again.- courtesy photo

Gert gave archery exhibitions. She said Bud had a human head carved out of wood; to recreate the classic William Tell shot, he would place an apple on the head and she would shoot it off.

“The last trick was always shooting the flame out of a birthday candle,” she said.

Once, at the Williams County Fair, they were working inside a roped-off area. The candle was set up, and with characteristic accuracy, she put out the flame.

“A man staggered up – I think he’d had a little much to drink – and he stepped over the rope, walked over, looked at the candle, and said, ‘My God, she split the wick.’ Then he staggered off,” Gert said.

Another time, the pair was conducting an exhibition at a gun shop opening in Columbia, Ind. A representative of a gun manufacturer cut off the cylinder of a 12-gauge shot gun shell, emptied the shot, ran a solid wire through the tube, and fastened it to a straw target at a distance of 30 feet. The open end faced the archer.

Gert said she drew her bow, held it for a long time, then let the arrow fly. It passed through the cylinder without striking the sides.

And did the man buy her lunch?

“Well, no, because there was free food,” she said.

She did that trick without the benefit of a sight on her bow. She said she didn’t put a sight on until she was pregnant with her third daughter, because she didn’t have time to practice.

Gert said her talent came to her naturally. Her father and brothers were all crack shots with firearms.

Even today, at 80, she does not wear glasses.

The couple, who will be married 62 years in August, built a home on Gaslight Drive in rural Archbold. There was a 60- foot indoor archery range in the basement.

The irony, Gert said, is when they finished the house, she stopped shooting competitively. But she did teach archery for a few years.

They got out of the archery business in 1975 or 1976 as business at their company, Hit Trophy, began to grow.

One man wrote them to say as a boy, he decided that when he got his first job, he would use his first paycheck to buy a Hit bow.

When he finally got that first job, the Hitts quit making them, he said.

They’ve begun to sell some of their collection of bows over the Internet. Gert said she’s surprised at the money some are bringing in. She reported getting more than $150 for a bow that would have originally sold for $20 or $30.

Gert said she enjoyed her years in archery.

“Every once in a while, I get the itch. I’m keeping one of my bows. I’ve got it laying on the spare bed.

“I pull it every once in a while, for exercise,” she said.

But she hasn’t shot in years.

Quoting an unknown author, she said, “It’s better to be a hasbeen than a never-was.”