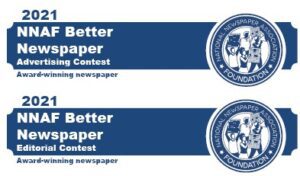 Winners will be recognized at an awards ceremony, Saturday, Oct. 2, during the NNA Convention in Jacksonville, Fla.

The Buckeye received first place in Best Single Ad Idea, Black & White in the daily/ non-daily division, circulation less than 10,000, for a series of Lugbill Supply Center ads titled, “Our Team is Dedicated To Being Your Friendly Hometown Experts.”

The ads, run in June and July 2020 during the early days of the Coronavirus Pandemic, reminded readers of the products and services offered by Lugbill Supply Center.

The judge said, “Consistent and well-organized layout paired with easy-to-read type choices for the motto and company information make this ad easily recognizable from issue to issue.

“Changing the verbal/visual product/service information each time keeps the ad fresh while showcasing the breadth of services the company offers.”

The Buckeye received first place for Best Sports Feature Story or Series in the daily & non-daily division, circulation less than 10,000, for a two-part feature on Alyssa Ritchey, by Mario Gomez.

The judge said, “Of the top four articles, this is the strongest. It’s an interesting story.

“You quote Ritchey a number of times, but the most gratifying aspect of a feature story is having others quoted and what they see with her struggles.

“The best features are not one-dimensional. It takes more voices to have a better all-around article.”

The Buckeye received second place in Best Use of Local Photography in Ads in the daily and non-daily division for a Terry Henricks Chrysler-Dodge-Jeep-Ram ad that was published Oct. 21, 2020.

The judge said, “I love how the names of the athletes are in the ads. Great idea, and it can be run multiple times, with a different picture featuring different athletes!”

The judge said, “Interesting article, but you might want to work a little more on AP style, general journalistic writing and description. This article has potential.”

The Buckeye received an honorable mention in Best Reader-Generated Campaign in the non-daily division for “Time For A Smile Break,” published several weeks during the early days of the Coronavirus Pandemic.

The paper published several weeks of photos of pets submitted by their owners, giving readers a chance to smile and a break from Coronavirus coverage.

The judge said, “People love animals! This is a great idea to get readers involved with the newspaper. Keep up the good work.”

The Buckeye received an honorable mention for Best Sports Photo in the non-daily division, circulation less than 3000, for a photo of Wauseon’s Connar Penrod sailing over Pettisville’s Mitchell Avina under the basket in a boys basketball game. The photo was published Feb. 26, 2020.

The Buckeye received an honorable mention for Best Business Feature Story in the non-daily division, circulation less than 6000, for “75 Years Ago, Fire Destroys Sauder Woodworking,” by David Pugh. The article was published Nov. 4, 2020.

The judge said, “An interesting historical piece that ties into present day, offering hope and inspiration.”

See pages 8-9 for all seven entries.