The Hooper Show is part of the annual Ohio News Media Association Convention, which celebrated its 86th year, Feb. 7-8.

The Buckeye competed in Division D with circulations below 2500. 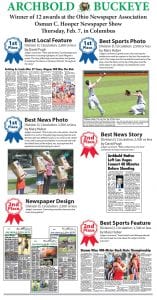 The Best Local Feature category was judged on the overall impact of the feature story or series of stories.

The Buckeye entry that won first place was, “Retiring As Coach After 37 Years, Wagner Will Miss The Kids,” by David Pugh. It was published on June 13, 2018.

The judge said, “Very well written. Good background information including highlights of Coach Wagner’s career. The story effectively used anecdotes and quotes to continue the theme of ‘all about the kids’ throughout the story.”

The Best News Photo category was judged on the overall quality and impact of a news photo as an integral part of the newspaper.

The photo was of a family watching the solar eclipse that was published on Aug. 23, 2017. It was taken by Mary Huber. 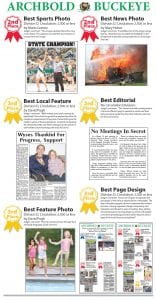 “This is just such a fun photo,” said the judge. “I love the details in it, such as the paper bag viewing helmets and the kids with two different socks or no socks at all.

“I think it was well composed and edited. It connected well with the overall story of the eclipse, too, and captured the experience we all had trying to view it.”

The Best Sports Photo category was judged on the overall quality and impact of a sports photo as an integral part of the newspaper.

The photo was titled, “Williams Holds Win On The Tip Of His Glove.” Published May 23, 2018, the photo was of Jeron Williams catching a “looping liner” on the tip of his glove for the third out of the seventh inning in Archbold’s 2-1 Division III district final win over Eastwood. It was taken by Mary Huber.

“Superb action shot enticing the audience to read the caption to find out if he made the catch,” said the judge. “This image has that wonderful uncertainty of the play, since the ball is on the tip of the glove and the other player is also sliding in to attempt the catch.

The Best News Story category was judged on the quality of writing and reporting and obvious extra effort that sets this news story apart from usual news coverage.

The judge said, “Well-crafted story of a local connection to major national news.”

The Best Sports Feature category was judged on the overall impact of the sports feature story or series of stories.

The Buckeye entry that placed second was “Stamm Wins 400-Meter Dash State Championship,” by Mary Huber. It was published on June 6, 2018.

The judges said, “Great details and dialogue elevate this and made me care about the subject and the outcome.”

The Newspaper Design category was judged on the overall look of the newspaper with emphasis on placement and organization of headlines, photos, stories, art, and ads.

Judges also considered quality and appropriate use of color, art and graphics.

The judge said, “Interesting modular elements that have strong pieces.”

The news photo that took second place was the photo of a burning house that was used as a training exercise for area fire departments. Published in the June 27, 2018, edition, it was taken by Mary Huber.

The judges said, “Incredible shot of the angry orange flames. I liked that you included the firefighter in the foreground to provide some perspective on how large they are.”

The photo that took second place was of Gavin Grime having his arm raised in triumph after winning a state wrestling championship.

“This image captured the entire story in one frame,” said the judge.

“The audience can feel the raw emotion of victory from this image.”

The feature that placed third was “Wyses Thankful For Progress, Support,” by David Pugh. It was published Nov. 22, 2017.

“Well-written story with a strong delayed lead,” said the judge.

“The article has good flow explaining what the couple has experienced. Strong use of anecdotes give the reader a sense of those experiences.

“Good job of weaving the theme (thankful, not bitter) throughout the article. A well-written close that brings the story full circle.”

The Best Editorial category is judged on the overall quality of writing, clarity, and local impact. There are no circulation divisions in this category, which means all entries were judged together.

The Buckeye entry that placed third was “No Meetings In Secret,” and was published March 28, 2018.

The judges said, “This started out with condemnation of a local official trying to operate in secret and then did a good job explaining why that behavior was bad for the community.”

The Best Page Design category was judged on the overall look of the page with emphasis on placement of visual elements that may include headlines, photos, graphics, infographics, advertising, color, etc.

The Buckeye entry that placed third was a two-page spread of the Feb. 14, 2018 edition that showed the awards the paper received in the 2018 Hooper competition.

The judge said, “Good use of space to separate the groupings of the various award places of the paper.

“The size of the place graphic did not overpower the content but was a strong organizer. Design consistency and hierarchy contributed to ease of reading.

“Also, adding the actual award-winning design or photo with judges’ comments provided good information beyond what a typical list would have accomplished.”

The Best Feature Photo category was judged on the overall quality and impact of a feature photo as an integral part of the newspaper.

The photo that placed third was titled “Jumping For Joy,” and was of three little girls jumping into the Archbold swimming pool.