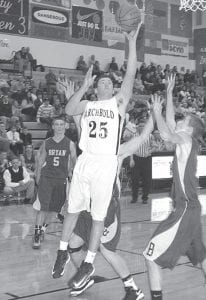 Tyson Dietrich (25) drives the baseline in Archbold’s NWOAL battle with Bryan. The senior led AHS with 19 points in the loss.– photo by Scott Schultz

The Bears used a balanced scoring attack, placing four in double digits, and took advantage of the charity stripe to pick up a 67-60 win.

“We made plays and shots early, and that gave us confi dence.

“We score 60 and lose… that doesn’t happen very often.”

In a tight contest lasting all four quarters, the Bears capitalized at the charity stripe to seal the win, hitting 12 of 18 from the game and nine of 14 in the final eight minutes.

The Streaks placed three in double digits but were ice cold from the free-throw line, hitting 15 of 28.

Trailing 16-14 after the first eight minutes, Bryan took the lead on the first shot of the second stanza on a Sean Culler three-pointer from the corner.

Archbold regained the lead on a jumper by Tyson Dietrich. It was the last lead the Streaks enjoyed as they chased the Bears the rest of the night.

Bryan scored the next seven points, with Culler draining another trey, Austin Martin adding a put-back, and Austin Schimmoeller converting a turnover into two for a 24-18 lead.

AHS came right back. Luke Fisher hit a jumper and a pair at the foul line, but the threes were raining down for the Bears as Jordan Spiess hit from the corner.

Fisher ended the night with 16 points, seven in the second stanza, as Bryan led 34-28 at the half.

The two squads exchanged baskets in the third, but Archbold closed the gap in the closing minutes of the period.

Trailing 42-36, Dietrich hit a turnaround jumper. Bryan countered with a jumper from Martin.

Tyson Schnitkey hit one at the foul line and Jase Grosjean hit a conventional three-pointer, closing the gap to 44-42.

Bryan hit a pair of free throws, upping the difference to 46-42. Schnitkey added a deuce for Archbold.

Martin scored on a putback for Bryan. Zeb Frank hit two of his 12 points to keep the game close at 48-46 as the quarter closed.

Schimmoeller took the life right out of the Streaks at the start of the fourth, nailing a three and pushing the Bears’ lead to 51-46.

The Streaks kept chipping away, closing the gap to 58-56 on a Dietrich foul shot. From there the Bears were golden, outscoring the Streaks 9-4 in the final two minutes for the 67-60 final.

Dietrich paced Archbold with 19 points. The Bears were led by Schimmoeller’s 21.

“We had opportunities from the foul line, and had good looks offensively,” said Krauss. “We just missed shots.

“Give credit to Bryan. They had guys step up and make shots. We just did not do a good job at the foul line and converting on opportunities.”