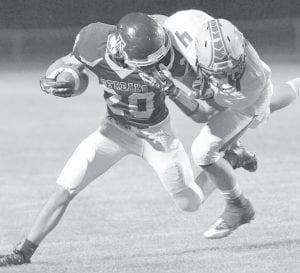 Leading 21-20, Bryan broke open its Northwest Ohio Athletic League opener with Archbold in the second half, outscoring the Streaks 33-9 for a 54-29 win, Friday, Sept. 6, at Archbold.

“Our kids battled their hearts out and didn’t back down,” said Bryan Miller, AHS head coach.

The Bears (2-0, 1-0 NWOAL) sent a statement early, scoring on their opening drive.

The Bears– the favorites to win the league– scored again in the closing seconds of the first quarter for a 14-7 lead to start the second quarter.

Roles were reversed in the second stanza as the AHS offense was clicking on all cylinders.

Evan Wyse scored on a nine-yard run to tie the score at 14.

Bryan answered with a 24-yard touchdown run from Daniel Pendergrast to go ahead 21-14. 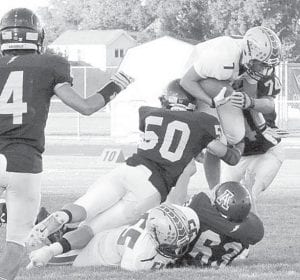 E. Wyse ended the firsthalf scoring with a 55-yard pass to Jase Grosjean. The point-after-touchdown pass failed, and AHS went into the locker room down 21-20.

The Bears took control in the second half, adding two touchdowns in the third quarter.

Lincoln Parsley connected on a 27-yard field goal for Archbold’s only score in the third, and AHS entered the fourth quarter down 34-23.

Following the field goal Parsley kicked a perfect onside kick. It traveled the required 10 yards and was recovered by the AHS kicker.

Two minutes into the fourth, Wyse again crossed the goal line, closing the defi- cit to 34-29.

It was the last time the Streaks scored. The Bears racked up 20 points in the final quarter for the win.

E. Wyse led the offensive charge for Archbold, with 100 yards on the ground on 27 carries and three touchdowns. Through the air the senior completed 23-38 passes for 270 yards and one touchdown pass to Grosjean.

Pendergrast led a duo of Bears with 112 yards rushing on 15 carries and two touchdowns.

Signal caller Austin Schimmoeller rushed for 103 yards and four touchdowns on 16 carries. He was 11-14 in passing for 221 yards and two touchdowns.

“We had a hard time stopping them in their running game,” said Miller.

“We had it close. We scored and then they scored, and we didn’t score, and the wind went out of our sails.

“Obviously Bryan is the favorite; on paper, they have the best team in the league.

“The biggest thing for me is, in a game like this you want your guys to come out and battle, be tough and stand up. Tonight our guys did that.