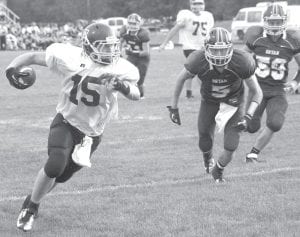 The Archbold football team made the short trip west, Friday, Aug. 31, to face Northwest Ohio Athletic League powerhouse Bryan, and in their league opener the Bears toppled the Streaks 56-14.

The Golden Bears are one of the top teams picked by NWOAL coaches to win the league.

The Bears jumped out to an early 7-0 lead in their 1000th game on a 75-yard run by signal caller Austin Schimmoeller on the first play from scrimmage.

“For some of these guys this was their first time playing in a big game like this,” said Bryan Miller, AHS head coach. “We do have some youth and guys going both ways.

“We will watch films, and the guys have to look within themselves and understand what they have to do to get better.”

Bacon scored his first touchdown with 3:22 left in the first quarter for a 14-0 advantage.

The Streaks cut the lead to 14-6 when Evan Wyse capped off a nine-play drive and scored from 2 yards out at the end of the first quarter.

On the ensuing kickoff Bryan again scored on its first play from scrimmage. Schimmoeller connected with Elijah Bogosian for a 69-yard touchdown toss.

Schimmoeller not only racked up yardage on the ground, but threw for 290 yards, connecting on 19-27.

Schimmoeller scored on runs of 62 and 4 yards to give Bryan a 35-6 lead before Wyse connected with Jase Grosjean for a 50-yard touchdown toss with 1:45 left in the second quarter.

AHS closed the gap to 35- 14 after Levi Wyse ran in the point-after-touchdown attempt.

Bryan went scoreless in the third quarter but crossed the goal line three times in the fourth for its 300th NWOAL win in school history.

“This was a special night for us, playing in the 1000th game and picking up our 300th league win, so we are pretty excited,” said Kevin Kline, BHS head coach.

“Turnovers were kind of the story of the game. We were able to get some turnovers and set up some scores; that was nice.

“I thought Archbold kind of settled in and did some things defensively and gave us some trouble.”

“We can’t have those turnovers,” said Miller. They hurt us early.

“I won’t say we overcame them, but at least we balanced them out and played even with Bryan in the second half.

“We needed to put points on the board early in the second half to make it a game. The defense battled in the second half, but we had those three turnovers towards the end, and the floodgates opened and we couldn’t overcome that.”

Tyson Dietrich led Archbold with 112 yards on nine receptions, but the Streak ground game was halted, rushing for only 50 yards.