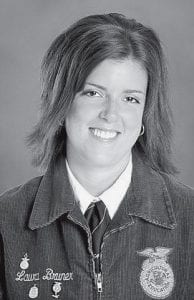 Laura Bruner, Pettisville, has received the American Star in Agriscience award, the highest award presented by the National FFA organization.

“It’s as high as you can get in FFA,” John Poulson, Pettisville High School vocational agriculture teacher, said Monday.

Bruner is a 2005 PHS grad. She is the daughter of Dan and Jo Bruner.

Bruner, a senior in an Ohio State University honors program, began studying plants for a science fair project her sophomore year at PHS. She had been working at Rupp Seeds, and asked if she could work on her project there.

That first project studied the genetics of squash.

She enjoyed what she was doing, and continued the project when the science fair was over.

Today, she is studying plant pathology in a molecular biology lab at OSU.

She’s working on her honors thesis, studying aracidopsis, a weed from the mustard family.

“It’s great to do work on,” she said, because its genome, or genetic fingerprint, is entirely mapped out, and it grows fast.

There’s a lot going on in the world of plant biology, including genome mapping and biotechnology.

“It felt great. I had a lot of people there who supported me,” she said.

She said she shares the honor with them.

She will graduate from OSU in the spring of 2009.

Poulson said Bruner was presented with the Star award during the FFA National Convention, Oct. 22-25, in Indianapolis, Ind.

To earn the honor, he said she had to fill out “bales of paperwork” and go through an interview with nine agribusiness and industry leaders.

He said Bruner “is always talking about new challenges, new plant diseases that need to be solved.”

Having a graduate win an FFA Star award reflects well on Pettisville High School and the school’s FFA program.

Bruner goes out of her way to credit Poulson.

“He has invested so much in me and a lot of students.

“Without him, I wouldn’t have gotten where I am.”