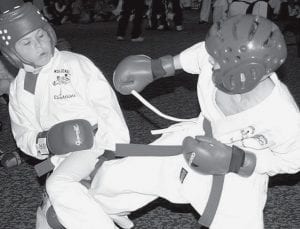 C.J. Brubaker, (left) sparring at a karate tournament in Cancun, Mexico. He brought home a gold medal. Brubaker recently completed testing for a black belt in the Shoalin Kenpo and San Ruy Do systems.- courtesy photo

The Archbold fifth grader started his study of karate at the age of eight.

He has participated in karate tournaments as far as Cancun, Mexico. He has won titles in open-hand forms, weapons forms, and sparring.

In addition to continuing his studies, Brubaker assists in teaching lower-ranked students.

He is the son of Alan and Cathy Brubaker, Archbold.

The first creamery to make large quantities of butter opened in Orange County, New York, in 1856.