Brodbeck Is Citizen Of Year

“A Calming Voice In The Midst of Chaos” 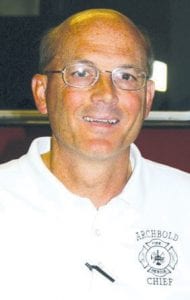 Andy Brodbeck, 2010 Archbold Citizen of the Year, has proven to be “a calming voice in the midst of chaos.”

That’s what one of the nominating letters said on Brodbeck’s behalf.

A member of Archbold Fire Department for 33 years, he has served as chief since 1996, and became the village’s first full-time chief in the early 2000s.

One of the nominating letters said, “Twice in the past year, in the wee hours of the morning, I needed to call the Rescue Squad. Both times, Andy Brodbeck was among the first to arrive.

“His confident attitude made me know my husband was in very capable hands, and his calming manner went a long way in reducing the anxiety I was feeling.”

A member of the Archbold Evangelical Church since 1975, Brodbeck has served in many leadership roles, including congregational president.

“Andy has given his time as a youth sponsor for several years, a quiz director for many teams, young adult director, trustee, and group leader.

“He has served as a past elder, and again exemplified his leadership as chair of the elder board.

He and Sherri purchased her parents’ catering business, and when Erie Sauder, founder of Sauder Woodworking, built Founder’s Hall, he asked the couple to operate the banquet hall and The Barn restaurant.

In 1993, Brodbeck said he was part of the team that worked with Erie on the Heritage Inn.

But one of those who nominated him tells a different story.

“During the construction of the Heritage Inn, Erie was unable to complete the management of the project. Andy assumed the responsibilities.”

He and Sherri have two sons, Kyle and Kurt.

Kurt is a youth pastor in Carmel, Ind. He and his wife Brooke live in Noblesville, Ind., with their son, Corbin, 3. They are expecting their second child.

Kyle owns and operates The Locker Room, and is a member of the Archbold Fire Department. He and his wife Tara have a son Keaton, 7, and daughter, Chaney, 5.

Brodbeck said he is humbled by the thought of even being considered (for Citizen of the Year), and feels blessed to have been chosen.

One of the letters in support of his nomination agreed.

“He is a very humble person, not seeking attention or praise from others. He seeks God’s will, and acts from his heart and follows his convictions even though they may be against what is popular.

“His passions are his faith, family, and community.”

“Everyone, in their own way, is deserving of being Citizen of the Year,” Brodbeck said. “Each person contributes to the community, their church, their workplace or an organization they belong to, and they all do it in a different way.

“I just happen to be the person picked this time, and I’m honored to represent the people of our community this year.

“I love this town, and I love the people. Archbold has been my place of residence my entire life.

“Some things have changed throughout the years, but one thing that hasn’t is that Archbold is still a great place to live, work, and raise a family.”