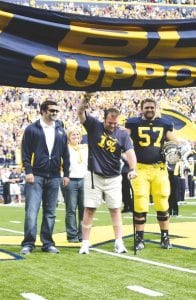 Brock Mealer, center, reaches up to touch the “Go Blue” banner at the University of Michigan Sept. 4 home opener in Ann Arbor, Mich. After a spinal cord injury suffered in an auto accident, he was given little hope of ever walking again. With the help of canes, he walked across the field at Michigan Stadium to lead the UM football team onto the field. At his left is his brother, Elliot, a UM player; to his right is his brother, Blake. Behind him is his mother, Shelly.–photo by Scott Schultz

Mealer was injured in a 2007 Christmas Eve auto crash near Pettisville that claimed two lives, including his father’s.

Brock’s injuries included damage to his spinal cord. A surgeon told him only 1% of those who suffered spinal cord injuries like his ever walk again.

The surgeon said she would not put him in that 1%.

The 25-year-old Mealer led the University of Michigan football team out of the tunnel and onto the field, Saturday, Sept. 4, in its season opener. His younger brother, Elliot, plays for UM.

Brock did it on his feet, walking– with the help of canes– across the field.

Speaking to the FCA students, Wednesday, Oct. 20, Mealer said many people had asked about the “1%” shirt he wore that day.

The other part of that shirt was the back, which said, “Glory to God.”

“I was really just trying to tell people, the only thing special about me was I always just held onto my faith, because so many times, it would have been just easy to throw in the towel and just give up.”

Mealer said he had plans for his life, but after the accident, those plans didn’t work out.

It would have been easy, he said, to close the door on that previous life, and not notice all of the other doors that were opening.

“Every day I get a chance to speak to a group like this, and all of the opportunities that have come my way like they have, I get a little bit clearer messages from God about what my purpose is and why I’m here, and what I can do to help other people.”

He admitted he was angry with God about the accident.

“I have had a lot of times when I was at the lowest of lows. My body was in the most pain I’ve been in in my whole life, and the emotional pain on top of that, of losing my father, and my brother lost his girlfriend…”

Elliot’s girlfriend was Hollis Richer, who died in the crash. They were Wauseon High School seniors.

“It has taken a lot to get through that pain. But the more I pray, and the more I read my Bible, I don’t know that I’ll ever get the answer of why this all is happening, but even though I get a little stronger every day, I’m just amazed at the opportunities God has given me.

“I felt that what God wanted me to do was to just say, ‘I’m going to walk,’ and just do it, because that brings hope to other people.”

“Every day, I have a constant battle with my body, telling my mind something is wrong and we can’t use these legs anymore, and we should just give up.

“My mind has to continually, every day, tell my legs just to take another step,” he said.

Progress in that battle was slow. There was little progress eight months after the crash.

“It’s so easy to get discouraged about what you’re doing, and wonder if that’s what you’re supposed to do.

“Every night, I would go to bed and just think tomorrow is another day and I’m going to give it everything I have.”

All he had in those early days was hope.

“Like they said, you know, with God and my family and all my friends, that’s the only thing that gets you through it.

“I think it’s been a real general message in life. God and family and friends are truly the only things that get you through your day-today life.”

Mealer said junior high and high school students “might think their problems aren’t as big as what I have going on, and maybe it’s selfish to ask God for things when you might think I’m more deserving or I’m more needing of prayers, but God is so big, so powerful.

“He wants to take those problems and those things on. It’s not too much for him to do everything for all of us.

“A lot of times, when an accident like mine happens, you wonder where God is, but every day, I just see more and more.

“And I always wonder why we go through the challenges and this struggle, but I know God has meaning for all of it, and every day, I’m learning a little more about why I’m here, and what I’m supposed to be doing.”

Mealer’s wheelchair has scratches and scuffmarks. He said it’s getting pretty beaten up.

It’s okay, though. He said he won’t be keeping it.