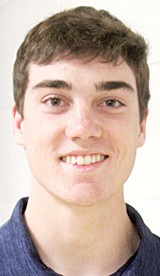 Brendon Johns, an AHS senior, likes to be challenged.

He is the Fulton County winner of the Franklin B. Walter scholarship program, a statewide program establishedby the Ohio Educational Service Center Assoc iat ion to recognize outstanding academic achievement.

The Northwest Ohio Educational Service Center recognizes one student from each school district with a $200 scholarship, then one winner from each county receives a $500 scholarship.

Selection of Walter scholars is based not only on grades, but also on school activities and awards.

Brendon is headed for the United States Military Academy, commonly know by the town where it’s located– West Point, N.Y.

Brendon has a 4.0 gradepoint average. Some who earn 4.0 gpas find it comes easy; some work very hard at it, sweating every quiz and homework assignment.

He described himself as somewhere in the middle.

“I do work hard for things,” he said. “I’d spend hours and hours every night on homework, but I wouldn’t say I sweat every little test and quiz.

“However, my 4.0 gpa is very important to me, so I want to keep that as long as I can; hopefully until the end of the year,” he said.

His hardest classes were Advanced Placement English and calculus.

“Last year, I took AP government, and that was a real eye-opener for me as a student, but I managed to sur- vive,” he said.

“But when they’re expecting a lot out of you, then it becomes a much harder class than other ones.

“Everyone always says junior year is a harder year. That was in the middle of my junior year, and there were countless hours of homework, probably every night.

“It was a really busy schedule, but I think it made me a better student, so I liked it a lot.”

Walter scholars get to pick a teacher to honor. Brendon picked Brenda Beck.

“She was my algebra II and pre-calculus teacher. She really helped me discover I want to go into civil engineering and mathematics,” he said.

Brendon said he enjoys math because “in the natural world, I like seeing things with numbers. I like to notice patterns within some sequences and within some numbers.

“That was a big part of why I loved pre-calculus and algebra II,” he said.

Getting into West Point is difficult.

Brendon said he started the application process at the beginning of his junior year.

Just about two months ago, he received word he was accepted.

There were a lot of interviews and meetings with congressmen and senators, he said.

Once a student graduates from West Point, the student becomes a commissioned officer in the United States Army.

Brendon said he is committed to Army service for five years, plus three more years in the Army Reserve.

“I haven’t decided if I’m going to pursue a military career, but I’m very open to it. And, obviously, I want to serve my country,” he said.

Brendon says he’s ready for it.

“I’ve been preparing for this. I passed the physical aspects of it already, but I know they challenge me in many ways and in ways that I won’t even have prepared for,” he said.

“But I’ve just got to embrace how this will make me a better person and how this challenge will help my lifestyle.”

Describing himself, Brendon said, “I like to work hard, and I like to have fun. Both of those things.

With that kind of attitude, West Point shouldn’t be a problem.