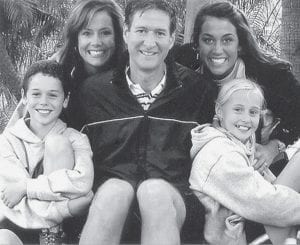 Thanksgiving is a time for many to reflect on the blessings they enjoy.

Brad Rupp, Archbold, has much to be thankful for.

Rupp always enjoyed perfect health. He played basketball for the Archbold High School Blue Streaks, graduating in 1982, and went on to play college ball at Taylor University in Upland, Ind., graduating in 1986.

“I had no health issues,” he said.

But almost exactly two years ago, on a Saturday night, Rupp became ill.

“I thought I had the flu. It kept getting worse and worse, so we went to the doctor. He sent me to Toledo Hospital. They found out I had a staph infection. Staph attacks the heart valves,” Brad said.

It could have been a death sentence.

“We went from being sick on Saturday night, to having open heart surgery on Friday,” he said.

On Wednesday before the surgery, Brad’s family was brought in to say their good-byes.

Physicians removed his damaged, infected heart valves and replaced them with pig valves.

“I tend to snort a little more now,” he said jokingly.

But that wasn’t all. During the next few weeks, physicians were concerned he might need his spleen removed. His kidneys failed. He was fortunate they started functioning again, but he had to go through dialysis three times.

Yet today, he is fully recovered.

He did not lose fingers or toes, as sometimes happens. He is not on any long-term medication. He has yearly check-ups, and he faces more surgery in the future.

“I still have flips and flutters in my chest, but for the most part, I’m living normally,” he said.

He even exercises daily.

“All the medical people say it’s a miracle I’m alive,” he said.

It’s been two years since the episode, but Brad’s wife, Julia, said not a day goes by that they don’t think about the experience.

“It’s tenderized our hearts to others in need. When we hear others have illnesses, we used to be surprised or shocked. Now I cry, and we pray for them,” she said.

“You talk about being thankful; we’re thankful that God does do miracles. We’re thankful for the people who prayed for me,” Brad said.

In fact, Brad said he was approached by a woman who told him, “You don’t know who I am, but I prayed for you.”

“God does miracles. There is no question,” Julia said.

She said confronting death at a relatively young age was something she didn’t think she and her husband would ever face.

“But through it all, I knew God was there. He was present. He had a purpose,” she said.

“Our faith definitely saw us through,” she said.

Coming to the family’s aid during the difficult times were a number of people.

Brad, a self-employed insurance agent, said his office staff did a lot to help, and the people of the community came to their aid.

“People put up our Christmas lights and Christmas tree,” he said.

“It was right at Thanksgiving time. People took our Christmas lists, and went out and bought our Christmas presents and wrapped them. Two neighbors tutored our kids. (Natalie, 10, and Lucas, 8, are at home. Lindsay Will, 22, attends Taylor.) Food came in for months,” Julia said.

She only recalled two times when she was really scared.

Once, she was at the hospital alone, “and I felt Brad was going to pass away.”

She called her two prayer partners at 3 am, and “they drove to Toledo to be with me.”

The other time was when Brad was going into surgery. Julia said he was so sick, he didn’t understand what was going on.

“I was afraid he was going to wake up and be afraid,” she said.

Brad said he was so “out of it” during the whole ordeal, he is still today finding out bits and pieces of what occurred while he was ill.

During dialysis, Brad said he got very cold and uncomfortable. One woman took a fleece jacket and sewed in flaps for the dialysis ports and intravenous tubes.

“People were so kind. It was humbling,” Julia said.

While Julia said family time had always been a priority for the Rupps, she said Brad spends more time with the kids.

Of the children, Natalie is the one who was most affected.

“She’s still afraid something will happen to her dad,” Julia said.

The children get to spend one night a week in sleeping bags on their parent’s bedroom floor next to the bed.

No one knows how Brad contracted the infection, but he said today, “We don’t take cuts and scrapes for granted.”