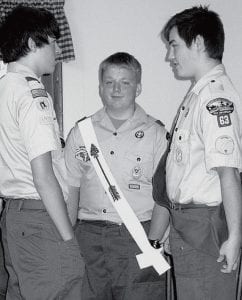 From left, Tyler Bechstein, Dustin Roth, and Cory Moon, all members of Archbold Boy Scout Troop 63, wait for festivities to start during the Troop’s Court of Honor, held Monday, Aug. 27. A total of 41 merit badges were handed out during the event.- courtesy photo

The actions came at the troop’s last Court of Honor ceremony, Monday, Aug. 27, at the Scout Cabin in Ruihley Park.