Bowman’s Bowls On The Block At Fairlawn Auction

But Helen's Pies Bring In The Money! 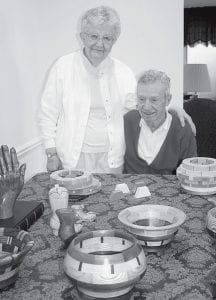 Helen (left) and Lauren Bowman, who live in the Fairlawn duplexes, with some of the wooden bowls and carvings he sculpts. He has donated several of his works to the Fairlawn Auxiliary Auction, but Helen reports her homemade pies bring more money.- photo by David Pugh

Lauren Bowman has contributed handmade wooden bowls to the Fairlawn Auxiliary Auction each of the four years he’s been a resident of the complex.

Made from blocks of wood, they’re glued together, then worked on the lathe in the Fairlawn woodshop.

She agreed, saying, “My mincemeat brought $110. My ground cherry (made with fruit from the ground cherry plant, Physalis pruinosa, not common cherries ground to pulp) brought $90.”

She even joked that Steven Ringenberg, Fairlawn executive director, said when Lauren turned in some of his bowls for the auction, he told Helen, “And you are going to make pies!”

Lauren admitted his previous woodworking experience was limited to projects around the couple’s home in eastern Ohio. He had never done any creative woodworking, other than some carving, while wintering in Florida.

Carving was a good activity there, he said, because he didn’t have a lot of tools at hand.

When he began working in the Fairlawn woodshop, it was Lester Nafziger, who had donated his woodworking equipment to the shop, who mentored him.

Lauren said Lester suggested he try working with the lathe.

“I said, ‘I haven’t run a lathe since high school.’ He said, ‘It’s like riding a bicycle. Once you learn, you never forget.'”

Lauren’s bowls start as individual blocks of wood. The ends are cut at an angle of 22.5 degrees. Eight pieces fit together to make a circle or ring. Individual blocks can be made of different shades of wood to give the final product contrasting colors.

When glue is applied, the ring is clamped until the glue dries.

Then, rings of different sizes are glued together in a press to give the bowl its rough shape. Again, rings made of different woods can be offset to make a pattern.

The rough-shaped bowls are mounted on the lathe. As the bowl spins, Lauren uses several tools to refine the shape.

The most difficult part, Lauren said, is smoothing the inside of the bowl with a tool known as a gouge.

“That’s when the gouge is most apt to cause a problem.

“It will catch or jump, and scare you,” he said.

Lauren likes to try his hand at other things, too.

“I’ll make bowls for a couple months, then I’ll work on something else. It goes in spurts,” he said.

Lauren said he gets a lot of satisfaction from wood projects.

But another part of his interest is the fellowship he enjoys with other Fairlawn woodworkers.

“There are only about a halfdozen who go in with regularity,” he said.

One is Sam Oyer, who is “the best craftsman in the bunch.”

Oyer builds grandfather clocks; but rather than ordering a full kit, he buys the clockworks and builds the wooden and glass case from blueprints, Lauren said.

Lauren was even able to involve Andrea Bowman, his granddaughter, in woodworking. A 2006 AHS graduate, she chose to make wood vases for her senior project.

Today, she is attending school at Eastern Mennonite University, in Harrisonburg, Pa.

How often does Lauren go to the woodshop?

“She accuses me of neglecting the flower beds,” he said.

This year’s Fairlawn Auxiliary Auction is set for Thursday and Friday, April 2-3.