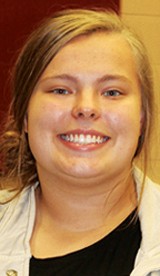 The best high school vocalists from across Ohio perform each year in February at the Ohio Music Education Assoc iat ion conference.

Hannah Bowers, an ArchboldHigh School senior, will be part of that prestigious group in 2018.

Hundreds of students– from big cities and rural towns, from high schools large and small– apply for a spot on the All-State Choir.

The selection committee only picks 160.

Being part of that group is an honor in itself.

Bowers has been picked three times.

She said while at rehearsals and performances, she meets other three-peaters.

“But not a lot,” said Kent Vandock, director of choral activities at AHS.

Bowers, he said, is only the second AHS student to make three trips to All-State Choir. Will Collins, who graduated in 2016, was the first.

In other years, AHS has sent several students at a time to All-State.

Other AHS students applied for the 2018 choir, but only Bowers was selected.

“My friends are happy for me,” she said.

At All-State, Bowers said, “I like the level of experience everyone has, because everyone’s different, but in All- State Choir, everyone takes it more seriously and they’re all super focused.

“I’m challenging myself more when I go there.

“Here (at AHS), it’s kind of like I do the everyday thing. But when I go there, it’s a weekend for me to challenge myself and learn new things to bring back to my choir.”

As an AHS choir section leader, she has a leadership role where she can implement the things she’s learned.

“Last year, as soon as I got back, I made sure everyone in my section had a pencil, because I realized how im- portant it was to start writing down things my director says,” she said.

“Sitting on the edge of our chairs was another thing I tried to push people to do.

“And always having water was another thing, because, people would just get up in class and get water. They might as well have it ready to go.

“So I pushed people to be prepared last year.”

Why is sitting on the edge of the chair important?

“You sit up, and you can take fuller, deeper breaths from your stomach instead of just your chest. It makes your overall sound quality a little bit better, instead of slouching,” she said.

Aren’t there days she would just as soon slouch?

“If I hold myself up here,” she said, indicating a spot in space, “the people in my section are here,” indicating a slightly lower spot.

“If I keep going higher and higher, they’re going to go higher, too,” she said.

Bowers said she wants to pursue her love of music in the future.

“I’ve applied to a couple of colleges, but I either want to go for music education or early childhood education and minor in music. I don’t know,” she said.

“As soon as I get to college, I want to join a choir.”

Those chosen for All-State are required to attend mandatory rehearsals in their regions of the state. Then, there are rehearsals for everyone at Otterbein University, and before the February performance.

Those rehearsals can be intense.

“A lot of that is like, we sing for hours at a time and we get a 15-minute break, then we sing for a couple more, then we go to dinner,” she said.

“It’s intense at rehearsal all the time, being mentally focused for such long periods of time.