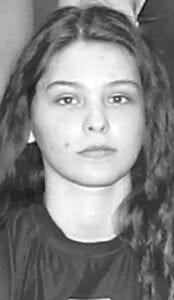 Wrest l ing in the 113- pound weight class, Bowerman finished 2-2 and just missed out on placing.

“I knew Logen would have a tough draw at state with her taking fourth at districts, but I didn’t expect her quarter to be as tough as it was,” said Brian Becher, AHS head coach.

“Her quarter bracket had the number two, four and eighth-ranked girls.”

She pinned Alliance’s X’nai Hatcher in 3:29, then won a 5-2 decision over Emma Rinehart of Mount Vernon to reach the consolation semifinals.

In the semis, Bowerman dropped a 7-3 decision to Sara Borton of Olentangy Orange to end her tournament run.

“With falling just one win short, I know Logen’s goal next year will be to place, and I expect that she will accomplish that,” said Becher.

“I love having her on the team. She does everything we ask her to do and has a great personality.

“When Logen gets more mat time and gets a better feel for positions, she is going to be very tough for other girls to beat.”