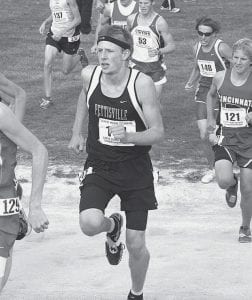 In his second straight appearance at the Div. III state cross country meet, Austin Borton, a PHS senior, finishes 41st and was named All- Ohio.- photo by Marty Rupp

Borton finished 21st, crossing the finish line in front of thousands of cheering spectators. His official finish time for the 3.1-mile race was 16 minutes, 22 seconds.

The state meet begins and ends on the Scioto Downs race track in front of stands filled with spectators, a different setting than most cross country meets.

Borton was Pettisville’s only qualifier for the boys race, so there was no team ranking for the Blackbirds.

Pettisville’s other state runner was Tanner Hostetler, a freshman, who competed in the Div. III girls race. She ran the course in 20:14, finishing 41st. 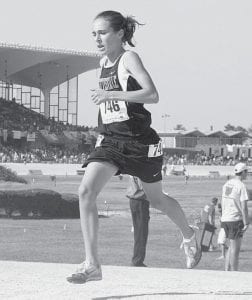 Stephanie Morgan, a senior from Barnesville, won with a 17:57 run.

Hostetler was the top Fulton County runner in D- III and the sixth freshman across the finish line.

“Austin did a great job and made All-Ohio for the second year,” he said. “Tanner had a great season, and did very well for a freshman runner.”

Hostetler was the MVP in the Buckeye Border Conference, was the district champion, and won several invitational meets during the season.