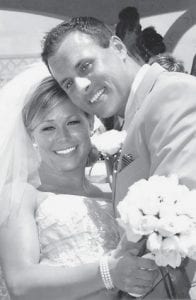 The bride is the daughter of Daniel and Nancy Borton, rural Archbold and the granddaughter of Ann Beck, Archbold. The groom is the son of Alan and Julie Mark, Washington Court House.

The bride arrived at the oceanside gazebo in a horsedrawn carriage. Given in marriage by her parents, she wore a mermaid-style, strapless gown of champagne and gold satin overlaid with organza, carrying a bouquet of ivory roses.

The reception was on the terrace by the beach overlooking the Gulf of Mexico.

The bride received her bachelor’s degree from the Ohio State University in 2002. She is a dental hygienist for Drs. Mc- Millan and Winkler.

The groom received his bachelor’s degree in economics from the Ohio State University in 2002 and is the sales manager for Viamedia, Inc.

The couple honeymooned at the resort.

They reside in Alexandria, Va.