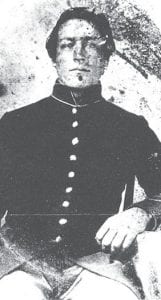 Among them were Samuel Borton, 21, rural Archbold, and his brothers Simeon, James, and Silas.

Chad said Samuel was a private in Company I of the 67th Ohio Volunteer Infantry Regiment, from August 1862 through July 1864. He served in Virginia, North and South Carolina, and Georgia, including the Second Battle of Fort Wagner in July 1863. The battle was the subject of the motion picture “Glory.”

Borton said he still has the cane Samuel used when he was an old man. One side features the initials GAR (Grand Army of the Republic.)

“He held his service near and dear,” Chad said.

Samuel’s letters and dairies have been loaned to the Fulton County Historical Society for its commemoration of the Civil War.

Chad said he and his children, Darby, 12, Aidan, 10, Marais, 9, and Wesley, 8, may someday join a Civil War reenactors group, where Chad could portray Samuel.

Chad said James was wounded and died on the way home. Simeon was killed in action.

Of Silas, Chad said, “We’re not sure where he ended up.”

Ohio suffered more than 35,000 causalities during the war, more than 10% of all of the Ohio men who served.