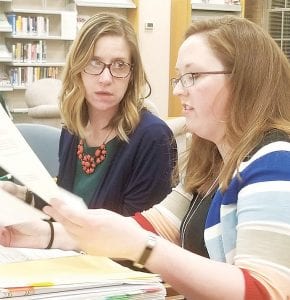 Harkey, who resigned from the library fiscal officer post in May 2018, was hurriedly rehired by the library board after Amy Wendt, rural Ridgeville Corners, resigned suddenly Dec. 29, 2018.

“She said, ‘Why don’t you just come over and look and see what you see?’

“So I show up, and then I realize the last bank rec. (reconciliation) that was completed was the one I’d done in April 2018.”

In an email to this paper, Harkey said reconciling the bank statement is “accounting 101.”

Harkey told board members they were given some reports, but not a bank reconciliation statement, “because it didn’t exist.”

There was at least one instance where about $6,600 was taken out of the STAR Ohio investment account managed by the office of the Ohio Treasurer.

Harkey said the money was moved in the library accounting software, but not in reality.

Harkey estimated the library lost about $1,000 in investment income it could have earned if money had been handled properly.

Harkey said her examination of the financial records indicate there was no theft of funds.

Harkey, a certified public accountant, was originally hired to be the library fiscal officer on Sept. 8, 2009. She was the fiscal officer for the Archbold and Delta libraries for several years.

In early 2018, Harkey took a position as the fiscal officer for the village of Swanton and resigned from the parttime job at Archbold.

The board held an emergency meeting on May 14, and hired Wendt.

From an initial field of four, there were two good candidates.

“We had two really wellqualified candidates, but Amy is the right one,” Huser said at the time.

Then, just days before the end of 2018, Wendt resigned from the job. She gave the library board no warning or notice.

Huser said Wendt’s decision resulted because of a family emergency.

In a telephone interview, yesterday, Tuesday, Wendt said her father is ill, and she is the sole person available to be his caregiver.

The library fiscal officer job “was a new position, and I was still learning it,” she said.

“I was only to work 16 hours per week, so I did what I could with the time available.”

Wendt said she had contacted Harkey for guidance, but Harkey is “not the easiest person to get ahold of.”

With the time constraints of caring for her father, “I knew I couldn’t get the endof year stuff done,” so she resigned.

Because of what Huser called “the crucial time of year for all things fiscal,” the board moved immediately to rehire Harkey.

Harkey said she has reconciled all of the bank statements from May 2018 forward. The STAR Ohio transaction was corrected.

In the past, Harkey said she doesn’t carry a lot of purchase orders over into a new year.

Because of “all the uncertainties,” she told the board she kept about $26,000 worth of purchase orders open at the end of the year.

Harkey said the library is being audited for 2017 and 2018. The auditors have been notified of the issues, she said.

At the March 13 board meeting, Harkey said, “Anyhow, you’re back in shape. I’ve got it back on track now.”

The next meeting is Wednesday, May 8, 7 pm, at the library.