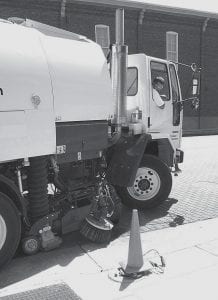 The Archbold Street Department street sweeper cleans up the remaining bits of glass from the light bollard on the northwest corner of North Defiance and Stryker Street Friday, Aug. 3. The bollard was destroyed by a semi truck, which ran over a special bell bollard, placed to protect the lighted one. It is the first time the lighted bollard has been destroyed since the bell bollard was placed in January.- photo by David Pugh

For the first time since special bell-shaped bollards were put in, one of two lighted bollards on Stryker Street was damaged by a semi-tractor trailer rig.

Martin Schmidt, Archbold Police chief, said the semi truck trailer was damaged after it struck the bell bollard and drove over it, before destroying the lighted bollard.

He turned the corner too sharp and struck the bell bollard on the northwest corner of the intersection.

The trailer went over the bell bollard, damaging a brake drum on the rear axle of trailer, and the rear bumper.

He was cited for making an improper turn.