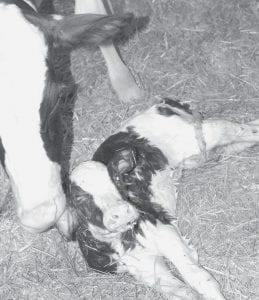 You never know what you might see at the Fulton County Fair! Last year Brie, a heifer owned by Travis Schroeder, 14, Wauseon, gave birth to a calf in front of a crowd of fairgoers. This photo was taken six minutes after the calf was born.

Last fall, when the economy headed south, Wall Street investment bankers and executives from the big car companies donned their $3,000 designer suits, revved up their private planes, and jetted to Washington, D.C., for help.

It could be argued, however, with one’s tongue firmly lodged in one’s cheek, that they’d have been wiser to instead make a pilgrimage to Wauseon, Ohio, to seek business advice from the Fulton County Fair Board.

Each year, this 15-member group, employing the commonsense Midwestern values of its community, puts on an event with attendance of 250,000-plus in a county with a population of roughly 45,000. And they do it at a time when many a county fair is struggling just to survive.

Clearly, this group is doing something right. That’s why eight to 10 other fairs contact them each year for advice. Chances are, the Fulton County Fair Board could even teach those Wall Street and Detroit fat cats some valuable lessons about running a successful organization.

Clues to Fair Board’s success begin to reveal themselves during a visit to a monthly board meeting at the fairgrounds office. It’s evident that Fair Board members, unlike Wall Street hotshots who authorize milliondollar office makeovers, don’t make fashionable decor a priority.

Their meeting room is neat and clean, but its rumpus-room paneling, vinyl-covered chairs, battered table, and single table lamp hark back to the Eisenhower administration. The only “perk” to be found in this room takes place in an ancient coffeemaker.

There’s nary a $3,000 customtailored suit in sight, either. Or any suit, for that matter.

Dressing for success on the Fulton County Fair Board means fashions by Levi® and Carhartt, suitable garb for tearing up a drainage ditch or shoveling manure should the occasion suddenly arise- because it just might, and the Fair Board will be first in line to do the job.

The Fair Board’s willingness to tackle tough jobs themselves is one reason for the Fair’s success.

“We have 15 members of the Fair Board and a 15-member Fair Board Auxiliary,” stated Carl Buehrer, organization president. “Every Tuesday night from April till a few weeks after the Fair in September, they come to work on projects on the Fairgrounds.”

On average, a Fair Board member spends 240 hours, the equivalent of six 40-hour weeks a year, working on the fairgrounds and covering other duties that come with the position. Most camp on the fairgrounds during Fair Week, working upwards to 18 hours a day to make sure everything runs like clockwork.

For that, they’re paid the princely sum of $300 a year, or roughly $1.25 an hour. That’s a far cry from the multimilliondollar compensation packages common among Fortune 500 CEOs. And, unless you count a few free meals on work nights, Auxiliary members receive no pay at all.

Not having a paid fair manager saves money, too. In fact, the only time the Fair Board hires labor is if a job requires skill no member possesses.

That surprised Kyle Sharp, editor of Ohio’s Country Journal, who toured the fairgrounds with Carl in 2007 for an article about the Fair’s 150th anniversary. The journalist was astounded to discover how many hours Fair Board members put into maintaining the fairgrounds.

“I was impressed by the grounds in terms of their size, the number of buildings, and the quality of the buildings- and not only the new buildings, but how old buildings had been maintained,” Kyle said. “I was surprised by the number of volunteers involved.”

He was also impressed with the Fair Board’s commonsense ability to get things done, particularly asking local farmers to design equipment for the fairgrounds, such as bleachers on wheels.

“Given the size of the county and the fact that the fair pulls in a quarter-million people, maybe the car companies could have asked the Fair Board for advice on creating demand for their product,” Kyle said.

“And instead of going to Washington, D.C., maybe those [investment] bankers would have been better off seeing how the Fair Board does business: make the most of what you have, get people to pitch in, and make good, commonsense decisions that aren’t going to run you into the ground financially.”

Lesson #3: Be Humble And Ask For Input

Despite the countless hours they invest in the fair, and unlike some self-important CEOs who toot their own horns loudly, the Fair Board refuses to take credit for the fair’s success.

“The reason the fair has been successful is that our community is behind us,” Carl Buehrer said. “They’re our customers, and without their support, we couldn’t do what we do. We really appreciate what they do for us.”

“That’s not just talk on Carl’s part,” said Mel Krill, a former Fulton County 4-H Extension Agent who has broadcast from the fair for WMTR-96.1 for the past quarter-century.

“The Fair Board is humble. They always give the community credit for the fair’s success. And they’re constantly soliciting suggestions from the community, asking what they can do to make the fair better.”

The Fair Board’s business philosophy is to put on a program that supports the people of their community- their customers- and provides them what they want.

“The almighty dollar isn’t everything,” Carl said, a statement that would trigger cardiac arrest in many business moguls. “Our goal isn’t how much money we can make; it’s how good a fair we can produce for the people.

“We keep in mind what a family would really spend in a week at the fair. Some people save just to come to the fair, and we want to give them the best we can at a price they can afford.”

Ticket prices for the fair’s big-name concerts, for example, are at least half those charged at most concert venues.

“There are people in our community who would never have the money to see a big-name person otherwise,” Carl said. “By keeping prices low, the fair can give them that opportunity.”

Tony Forshey, a son of Fulton County who is now the state veterinarian for the Ohio Department of Agriculture, chuckled when asked if big business would have done better to head to Wauseon than Washington.

“Well, when you enter that world of politics, things always take longer and there’s self-interest involved,” said Forshey, who was the Fulton County Fair vet for many years and now works with all the county fairs in Ohio.

“It can be the same thing with fair boards when you get a lot of different personalities on them. But (the) Fulton County (Agricultural Society) always does a good job of electing people who are willing to accept the responsibility of being on the Fair Board, of being accountable.

“Their Fair Board makeup is very diverse, too. That allows Carl Buehrer to delegate areas of responsibility. When you do that, you certainly get a lot more stuff done.”

Forshey said that the Fair Board has always done a great job of addressing problems very quickly and putting in place policies to prevent other things that could go wrong in the future.

He believes they’ve been aggressive and efficient with donations, too, using them to build new arenas and acquire land for parking.

“They’re proactive,” he said. “They work together as a team to get things done. You don’t always have that teamwork approach, and that is where Fulton County excels. They’re very visionary as a group.”

The Fair Board has borrowed money just once in Carl’s 38- year tenure.

Even then, the group avoided paying interest, which has eaten up the profits of many an organization, including some that American taxpayers are no doubt bailing out.

The one exception to the Fair Board’s “loan-free” way of operating took place when land contiguous to the Fairgrounds came up for sale one year, three weeks before Fair Week. Developers were interested in the property, but the Board, which had already spent a lot of its money to put on that year’s Fair, lacked the resources to make a credible offer.

“Fortunately, a fellow who loved the Fair came forward and offered to make us a five-year, no-interest loan,” Carl recalled. “The man lived in Texas, but he’d grown up in Fulton County, and he wanted to make sure that the Fair got the land.”

And, finally, what about the toxic assets that threaten to sink Wall Street investment banks? According to Carl, the Fair Board doesn’t have any toxic assets – unless you count the 41.93 tons of trash generated by Fairgoers during Fair Week.

“And we send that to the landfill just as soon as we can,” he winked.