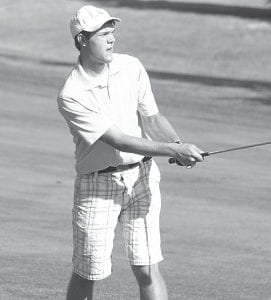 Archbold’s Jarrett Yoder was match medalist in the Blue Streaks’ quad match with Pettisville, Ayersville, and Fayette, Wednesday, Aug. 18. He shot a 37.–photo by David Pugh

The victory upped Archbold’s record to 14-6.

“We were very pleased with the scores in general,” said Kevin Miller, AHS coach.

“That is where we need to be to stay competitive with the better teams on our schedule.

“The bottom four golfers did what they had to do.

“Others behind them are steadily improving.”

Tyler Herschberger was low man for Pettisville in the quad match.– photo by David Pugh