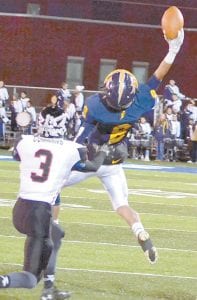 Nic Rodriguez stretches for a one-handed catch during Archbold’s 13-play scoring drive that gave the Streaks a 14-0 lead over Indian Lake.– photo by Mario Gomez

It was a home-away-fromhome win when Archbold defeated the Indian Lake Lakers 23-14 in the opening round of the Division V Region 18 football playoffs, Friday, Nov. 3.

The muddied turf at Archbold High School was not in playing condition, so the Streaks used Defiance’s Fred J. Brown Stadium to host their first playoff game since the 2010 season.

“Tonight they came out ready to go. I was very happy with the way they stepped it up.”

Dominating The First Half

Indian Lake won the coin toss and elected to receive the ball, and started at its own 22-yard line.

After a pair of first downs, a run for no gain, and Matthew Gladieux’s consecutive quarterback sacks, the Lakers faced a fourth-and-25 at their own 36, forcing a punt.

The Streaks began their opening possession at their own 36, and needed only three plays to hit pay dirt.

Facing a third-and-4 from the 42, Gabe Petersen called his own number and ran untouched straight up the middle for a 58-yard touchdown run and a 7-0 lead with 7:03 left in the first quarter.

After another Lakers punt, the Streaks took over at their own 23.

Archbold used a little over six minutes and 13 plays before Isaiah Gomez scored on a 17-yard pass from G. Petersen for a 14-0 lead in the second.

Starting at its own 25, Indian Lake got down to the Archbold 20 when a pass by quarterback Clay Jacobs was tipped in the end zone by Noah Gomez and hauled in by Nic Rodriguez, killing the Lakers’ scoring threat.

The Streaks went into the locker room leading 14-0.

Stepping Up, Stepping In

With AHS receiving the opening kick in the second half, the ball landed on the turf, was mishandled, and was recovered by Indian Lake at the Archbold 10.

On the second play, Jacobs tossed an 11-yard touchdown to Collin Coburn to cut the difference to 14-7.

On Archbold’s next possession, a 10-play drive that used up 5:14, Sam Petersen scored on a 1-yard plunge for a 20-7 lead after a failed twopoint conversion attempt.

But on the drive, G. Petersen sustained a knee injury and had to be helped off the field. The senior quarterback’s evening– and season– was finished.

Indian Lake started an 11-play drive at its own 32 and drove down to the Blue Streak 1, where Connor Dixon blasted through and scored to close the gap to 20-14 with 2:20 left in the third.

S. Petersen took over as quarterback and helped the Streaks move the ball into Laker territory.

Looking at fourth-and-22 from the Laker 28, S. Petersen tried to connect with L.J. Tijerina, but Indian Lake was guilty of pass interference.

The penalty moved the ball down to the Laker 14.

The Lakers began a drive at their own 25 and drove all the way down to the Archbold 26, but turned the ball over on downs with 6:44 remaining.

S. Petersen and N. Gomez handled the bulk of the running plays on the final drive, moving the ball down to the Laker 1.

With time running down, Archbold lined up in the victory formation and S. Petersen took a knee to end the game for Archbold’s first playoff victory since a 49-0 win over Northwood on Nov. 6, 2010.

“You always set goals. There’s win the league and make the playoffs, but we’re not satisfied just getting here,” said Dominique.

“We want to keep moving.”

G. Petersen carried the ball 10 times for 93 yards with one touchdown and completed 10-13 passes for 90 yards and one touchdown.

I. Gomez had three receptions for 35 yards and one touchdown.

Dixon rushed 17 times for 80 yards and one touchdown.

“We knew coming in they had a lot of athletes,” said Dominique. “We had to find a way to give them different looks and slow them down.