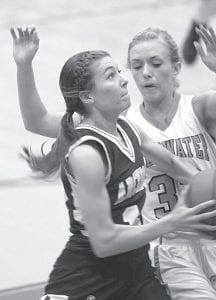 Chelsea Goebel drives strong to the basket in the first quarter of the district final. Coldwater’s Carly Schlater tries to prevent an easy basket.– photo by Mary Huber

Strong defense by Archbold and cold shooting by Coldwater resulted in a 13-2 first-quarter lead and 48-25 rout of the Cavaliers, Saturday, March 3, at Kalida, giving the Streaks the Division III district championship.

It is Archbold’s 10th district title in school history.

“I’m proud of our girls,” said Brian Ziegler, AHS head coach. “I couldn’t ask for any better of a start to a game, let alone a district final game.

The Cavaliers didn’t score again until 6:04 remained in the second period, when Meg Muhlenkamp scored their first field goal with a putback.

Coldwater was never able to get into an offensive flow, scoring in single digits in every quarter.

The Streaks built the lead to 29-9 at the half and 46-16 after three quarters as the offense hit on all cylinders.

The Cavaliers did outscore AHS 9-2 in the fourth, but the Streaks brought home the championship trophy and the 48-25 win.

“We showed a lot of determination tonight,” said Ziegler.

“Once again our bench was huge tonight when Abby Short and Chelsea Goebel had to sit with fouls.

“I liked what we did offensively. We took what they gave us and didn’t force it. We did a nice job getting Cassidy Wyse the ball and had nice balanced scoring.”

“We didn’t hit any shots early and couldn’t get into our press and do some of the things that we like to do.

“(Archbold’s) defense not only disrupted our offense and took our confidence away, but it also created their offense.

“Their defense creates a lot of transition points.”

Sarah Kanney, who led the Cavaliers with 25 points, including five three-pointers, in Coldwater’s 62-48 sectional championship victory over Allen East, was limited to two points by the Streaks.