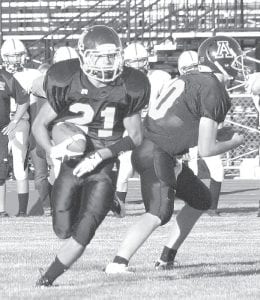 T.J. Gerken (21) looks for an opening to dart through. The Blue Streak junior had four receptions for 159 yards and scored three touchdowns in Archbold’s 47-13 season-opening victory over Hicksville, Friday, Aug. 27.– photo by Scott Schultz

The Archbold Blue Streaks kicked off the 2010 football season in flying colors, handing the Hicksville Aces a 47- 13 loss in non-league action.

“Week one is probably the most nerve-racking game of the season, because you want the kids to be rewarded for everything they have done,” said Bryan Miller, AHS head coach. “I am just really happy for our kids.”

Garrett Morton, AHS quarterback, was near perfect, completing 13 of 14 passes for 284 yards and four touchdowns.

Passing the wealth around, Morton connected with six different receivers, with T.J. Gerken leading the way.

Gerken had four receptions for 159 yards and three touchdowns.

Miller was quick to hand out praise for his senior quarterback and receivers and lauded his offensive line.

“Our offensive line did a great job,” said the AHS coach. “The bottom line is, when we win, the offense is getting all the credit. 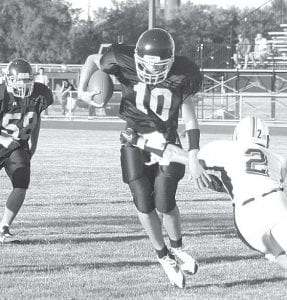 A Hicksville defender gets a hand on Blue Streak quarterback Garrett Morton. The AHS senior completed 13 of 14 passes for 284 yards and four touchdowns and ran for two of his own in the season opener for both squads, Friday, Aug. 27.–photo by Scott Schultz

“We expect the quarterback to play well. We know we have good receivers that will make plays, so when we win, all five of those offensive linemen get the credit.

“They communicated, and when you give their quarterback and receivers that kind of time they can make things happen.”

With the offense clicking on all cylinders scoring 34 first-half points, the Archbold defense held the Aces scoreless in the first quarter.

The Blue Streak defense gave up just one touchdown in the second quarter, a Justin Miller four-yard run that closed the gap to 13-7.

That was the closest the Aces would get. Morton connected with Gerken for a 36- yard touchdown and Morton added a two-yard run on Archbold’s next possession.

Looking to cut the defi- cit as the first half ended, Hicksville came up short when Hayden Stamm intercepted a Miller pass. Stamm raced 59 yards for a touchdown with one second left for a 34-7 advantage.

“The interception return at the end of the half by Hayden was a huge play in the game,” said Miller.

Archbold added two scores in the second half. Morton scored from 3 yards out, then hit Gerken for a 24- yard touchdown toss.

Miller added one touchdown for Hicksville in the fourth on a 1-yard run.