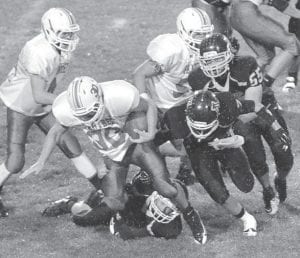 Archbold upped its record to 6-1, 4-1 in the Northwest Ohio Athletic League with a 37-8 win over visiting Delta, Friday, Oct. 5 on a cold, raindrenched night.

“The great part is, and what makes it fun– we are in a great position. This is what the kids have worked hard for, so we will see what happens.”

Following a stalled Delta opening possession, the Streaks put the first points on the board on a Lincoln Parsley 30-yard field goal.

Archbold added a touchdown in each of the remaining three quarters for its total of 37.

Tyson Dietrich crossed the goal line from 6 yards out in the second, and E. Wyse connected with Lincoln Parsley for a 54-yard TD toss in the third.

Jay Miller closed out the scoring for Archbold with a 15-yard fumble return in the fourth.

Miller’s fumble return for a touchdown was the first since 2011, when Gabe Rodriguez returned one 24 yards in a game against Montpelier.

Miller’s return placed him sixth on the all-time list for fumble return yards. Duane Hayes holds the record, returning a fumble 36 yards in a game against Napoleon in 1962.

In the history of AHS football, a fumble return for a touchdown has only happened 15 times.

The Panthers did have success moving the ball in the first half, but couldn’t put any points on the board. They managed eight points late in the fourth quarter.

With Archbold backed up against its own end zone, the Panthers recorded a safety for two points.

With 2:20 remaining in the contest, Delta’s Mark Francis crossed the goal line on an 18-yard run for the Panthers’ final points.

Francis had 113 yards rushing on 22 carries, while E. Wyse led Archbold with 88 yards on the ground. The Blue Streak quarterback threw for 231 yards, completing 9-17.

The Panthers completed just one pass for 6 yards.

“This was a good win,” said Miller. “You know, the weather hasn’t been very cooperative this year, but I guess everyone is getting used to it and have to deal with it.

“It helped to get off to a good start and get points on the board early.”