Blue Streaks Top Aces With A Pair Of Sevens 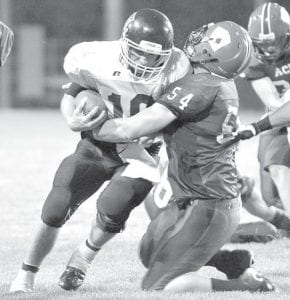 Above: Archbold quarterback Evan Wyse fights for yardage against Hicksville’s Blake Sholl. The AHS senior rushed for one touchdown in the first quarter and led AHS offenstively with 214 yards on 37 carries. Right: an unidentified Blue Streak defender wraps his arm around the calf of Aces’ receiver Damon Walters and gets the tackle. The Streaks beat the Aces 14- 0 in their season opener, Friday, Aug. 30.– photos by Mario Gomez

Archbold scored a pair of touchdowns to open the football season with a 14-0 win over the Hicksville Aces, Friday, Aug. 30, at Hicksville.

“First thing– you have to be so proud of the kids from Hicksville,” said Bryan Miller, AHS head coach. “That is what football is all about.

“There are 30 guys on that team, and they do such a great job. That is not even my team and I am so proud of them.”

Archbold took the opening kickoff and marched right down the field on a nine-play drive with Evan Wyse rushing in from 1 yard out.

A Lincoln Parsley pointafter touchdown kick put the Streaks up 7-0.

It looked like it may be a long night for the Aces.

Nothing was further from the truth as Hicksville’s defense kept Archbold from scoring again until late in the fourth quarter.

Parsley got a shot at a 27- yard field goal to close out the first quarter, but the senior was just off the mark.

AHS suffered from a pair of costly turnovers, the first coming in the closing seconds of the second quarter. 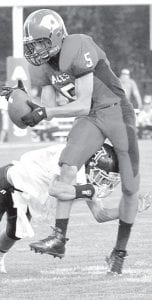 E. Wyse spotted an open Levi Wyse for a 6-yard gain to the Hicksville 31-yard line, but the Aces forced a fumble, recovered the loose ball, and elected to run out the clock trailing 7-0 at the half.

With Hicksville looking to get some offense going to start the third quarter, Archbold’s Jase Grosjean put an end to the drive, coming up with an interception on the Archbold 26.

Twelve plays later, on the Hicksville 7-yard line, Parsley coughed up the pigskin with the Aces recovering

Hicksville wasn’t the only one playing tough defense. The Archbold defense bent but never broke, shutting out the Aces all night and limiting them to just 122 yards of total offense.

E. Wyse led AHS offensively, rushing for 214 yards on 37 carries. That puts him in the number nine spot in the AHS record book for yards rushing in a game.

Tim Grieser holds the record, rushing for 338 yards on 22 carries against Northwood in 1970.

The senior signal caller also connected on 11-17 passes for 110 yards.

Archbold put the game out of reach in the fourth quarter.

Capitalizing on their sec- ond interception of the night, the Streaks took over on their own 13-yard line with 8:15 left.

Fifteen plays later and with 56 seconds left, L. Wyse crossed the goal line from 4 yards out, dealing the Aces an opening-game loss.

“We had opportunities early where we could have changed the completion of this game and it wouldn’t have been so tight, but the credit goes to Hicksville,” said Miller.

“I have been on our guys. We have been sloppy from day one. We haven’t practiced well, and this has been my biggest fear– that we would come here and do what we did and make mistakes.

“But give credit to our defense. They won the game for us.”