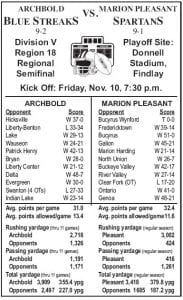 However, they’ll have to play without quarterback Gabe Petersen, who suffered a seasonending knee injury against Indian Lake last week.

Gabe’s brother Sam will take the snaps instead.

After last week’s 23-14 victory over Indian Lake, the Streaks, who finished third in Region 18, have a tournament record of 16-10.

The Spartans, who finished second in Region 18 and sixth in Div. V in the final Associated Press poll of the season, are making their 22nd appearance in the playoffs in school history, and have a 27- 18 record in postseason play. They defeated Genoa in the quarterfinals 48-21.

The Spartans have won three state championships; the last time was in 2002.

Archbold is averaging 31 points per game and allowing 13.4 ppg in its 11 games this season.

The Spartans’ largest margin of victory was a 51-0 win over Bucyrus on Sept. 8.

Pleasant finished second in the Mid-Ohio Athletic Conference with a 6-1 record, losing only to Div. IV Clear Fork (11-0) in a 20-17 overtime loss.

According to the Marion Star newspaper, in Pleasant’s regional quarterfinal game last week against Genoa, the Spartans finished the first half with a 20-play scoring drive that took more than eight minutes off the clock for a 20-14 lead at the break.

Pleasant scored three touchdowns in the third period to take a commanding 41-14 lead into the final quarter.

When the Pleasant seniors were in the seventh grade, they “didn’t even win a single game,” Chase Tipsword, an offensive lineman, told the Star.

Patrick Blubaugh rushed for 166 yards on 14 carries against Genoa, while Matt Chase ran for 148 yards on 17 carries. Quarterback Ethan Warner ran for 58 yards on 10 carries.

Marion Pleasant averaged 333.6 yards rushing per game and 46.2 passing yards per game during the regular season.

Warner passed for 416 yards on 25-50 passing with six touchdowns and three interceptions.

Blubaugh was Warner’s top receiver with four catches for 108 yards and two touchdowns.

Brayden Stark leads the Spartans in quarterback sacks, with 11. Kory Pyrtlarz had nine, Chase had eight, and Alex Enders had seven.