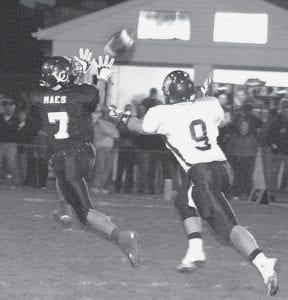 The experience of déjà vu is a compelling sense of familiarity, and also a sense of eeriness, strangeness, or weirdness.

There certainly was familiarity when Archbold traveled to Tiger Stadium, Saturday, Nov. 1, to face Liberty Center in the first round of the Division V football playoffs.

It may have been a little weird, meeting a Northwest Ohio Athletic League rival just one week after losing on a field you haven’t won on since 1989.

It may have been a little strange playing a foe who’s familiar, but whom you’d never before met in the playoffs.

And it may have been a little eerie when, on their first play from scrimmage, the Streaks turned the ball over.

It wasn’t a complete cycle of déjà vu. Nothing happened as it did the week before, except for the fact that both teams played hard-hitting football.

This time the Streaks posted a 26-6 victory to improve to 9- 2 and advance to the regional semifinals. 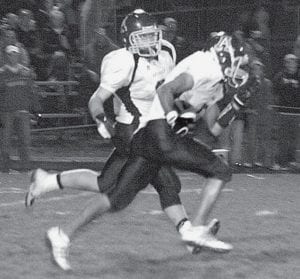 Breon Price, shown running with the ball, moved into a tie with Jerry Zuver for most interceptions in a season, with nine. He had two on Saturday night.- photo by Scott Schultz

“That was real sweet,” said John Downey, AHS head coach. “Our kids played real hard on both sides of the ball. We had some missed opportunities, but they kept fighting back. I am real proud of our kids.”

Archbold “made the plays and we didn’t,” said Rex Lingruen, LCHS head coach. “We lost this game ourselves.”

LC took an Aaron Bontrager kickoff to the Tigers’ 37-yard line to open the game, but after picking up a pair of first downs the Tigers were forced to punt.

The AHS offense took the field, and on the first play from scrimmage, senior signal caller David Rupp tossed an interception to Damien Maes.

The Tigers set up their second drive at their own 37-yard line, but once again the Streak defense forced the Tigers into a punting situation.

The Archbold defense gave up only 198 total yards of offense and one touchdown, a 60-yard scamper by Jake Elling in the second quarter.

Between The Hash Marks

AHS took a 20-6 lead into the break with special teams playing a part on both sides of the ball.

LC’s special teams blocked a pair of field goal attempts in the third quarter. The first came on Bontrager’s 25-yard attempt; Logan Burdue got the block.

LC took over on its own 15- yard line. Tiger quarterback Patrick Brown missed his mark on first down. Following a 9-yard pickup by Elling, the Streak defense came up with a stop on third down.

Facing fourth-and-less-thanone, LC decided to go for the first down. The pile on the line of scrimmage had Elling short of the first down, and AHS took over on LC’s 15-yard line.

“If we can’t get one yard we don’t deserve to win,” said Lingruen. “It was less than a yard and we had two plays to get it. What was disappointing, we came out in the wrong formation. But that is beside the point; we have to get a yard.

The Tiger defense, with their backs up against the wall, stiffened and forced the Blue and Gold to go for another field goal.

This time Andy Spiess came up with the block and the Streaks again came up empty.

Archbold defense shut the Tigers out in the second half. The Blue and Gold offense crossed the goal line one more time, late in the fourth quarter on a 1-yard Rupp run, for the 26-6 final.

The AHS defense had a stellar performance, giving up just 155 yards on the ground and 43 through the air, in part due to Breon Price, who picked off two Brown passes.

The senior leads the team with nine interceptions, moving him into a tie with Jerry Zuver for most INTs in a season. Zuver had nine INTs in 1970.

Archbold’s all-time leader for INTs in one season is Jack Arthur, with 13. He had 19 in his career; Price has 10.

While the Blue and Gold defense was stating its case, Rupp also made a statement by setting Archbold’s all-time mark for yardage in a playoff game. He completed 18 of 24 passes for 181 yards, breaking last year’s record set by Gene Goering, who threw for 171 yards on 30 attempts and eight completions against Liberty-Benton.

“The kids showed tremendous heart and effort,” said Downey. “This was a tough physical ball game, and we just kept hanging in there.

“Bottom line is, you want to win in the playoff and go another week. The win here is nothing.”