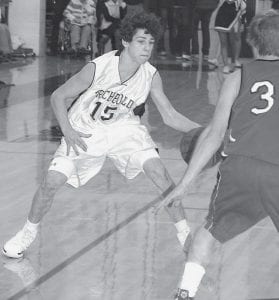 Telly Fricke, looking for a clear lane to drive to the basket in the Streaks’ Dec. 6 game with Wauseon, scored 12 points in Archbold’s 58-53 overtime win over Liberty Center.- photo by Scott Schultz

AHS controlled the Tigers throughout most of the contest, but missed foul shots and a determined LC squad allowed the Tigers to chip away at the lead, and then take the lead on a three-pointer with under two minutes to play.

Archbold could not convert on their next possession. LC extended its advantage to 51-48 with one minute left in regulation.

David Rupp, who led Archbold with 20 points, buried a three from downtown Liberty Center to knot the score at 51.

Corey Walker came up with a steal, and the Blue and Gold held for a last shot. Telly Fricke’s shot rimmed out, sending the game into overtime.

The Streaks took advantage of the charity stripe in the OT, connecting on five of seven. AHS also held the Tigers to just two points.

Sam Miller and Rupp both connected at the foul line, and after a Fricke pull-up jumper put the Streaks ahead, the sophomore connected on three of four from the foul line for the 58-53 final.

Fricke closed the game in double digits with 12 points.

“It was a good, hard-fought ‘W’ for us on the road,” said Doug Krauss, AHS head coach. “We had the lead throughout, but just couldn’t put them away with many opportunities at the foul line.

“We are much better shooters than what we’re showing from the line right now. It just comes down to confidence.

“It was nice to see David (Rupp) really break out with a double-double (20 points and 12 rebounds), and Micah McQuillin worked hard on the boards (13 total).

“Corey Walker came off the bench and gave us a nice lift as well. We just have to work hard and continue to get better.”

Kalida jumped out to a 17-5 lead after the first quarter and never looked back, posting a 60-34 victory.

Jordan Basinger and Kristopher Osterhage paced Kalida with 15 and 11, respectively.