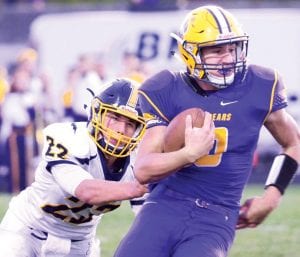 Archbold’s Gavin Grime (22) tries to stop Bryan’s Nate Miller from gaining yardage in their NWOAL battle, Friday, Sept. 29. The Streaks are 3-0 in the league after a 28-0 victory.– photo by Mario Gomez

With Archbold’s 28-0 win over Bryan and Wauseon’s 35-24 victory over Liberty Center, Friday, Sept. 29, the Streaks control their own destiny in their quest for a Northwest Ohio Athletic League championship.

The Indians, Tigers, and Swanton are all right behind AHS at 2-1. The Tigers come to Archbold Friday for a crucial league contest with playoff implications on the line.

Liberty Center (5-1) dropped to 11th in the AP poll and is still fifth in the Region 18 rankings with Friday’s loss.

“My hats off to Bryan,” said David Dominique, AHS head coach. “Coach (Grant) Redhead had them ready to go off the bat.”

Off To A Slow Start

It looked to be a great start for the Blue Streaks after Zach Rocha intercepted a Bryan pass on the third play of the game and returned it to the Golden Bears’ 17-yard line.

A holding penalty moved the ball back to the 24, but AHS was unable to move the ball and turned the ball over on downs.

Archbold’s defense kept Bryan on its heels the entire first half, but the Archbold offense found it difficult to get into an offensive flow.

Finally, with 1:40 left in the first half, the Streaks moved the ball from midfield to the Bryan 3 in seven plays.

With 10 seconds left, Gabe Petersen scored to give Archbold a 7-0 lead.

“We were able to move the ball; we just couldn’t capitalize,” said Dominique.

“Mental mistakes kill you on offense, so that kind of hurt us. You’ve got to play four quarters; we just kinda came out a little flat.”

Owning The Second Half

Archbold took the opening kickoff in the second half and marched down the field in six plays, scoring on a Sam Petersen 1-yard run for a 14-0 lead with 9:51 left in the third.

After Bryan turned the ball over on downs at the Archbold 30, it took AHS only five plays, with the help of a Golden Bear 15- yard personal foul penalty, to score its third touchdown when G. Petersen scooted into the end zone from 44 yards out to extend the lead to 21-0.

The Streaks scored their final points on a G. Petersen 37-yard touchdown pass to Deven Girdham with 48 seconds left for the 28-0 final.

“The second half was special,” said Dominique. “We dominated the line of scrimmage. That’s what we were looking to do.”

S. Petersen rushed for 102 yards on 15 carries with one touchdown.

Girdham caught two passes for 43 yards and one touchdown.

Archbold had 342 yards of total offense with 230 yards rushing.

Quarterback Zac Nobis had 203 of Bryan’s 221 yards of total offense, with 133 yards passing and 70 yards rushing.

The Streaks held their sixth straight opponent to under 100 yards rushing, yielding 88 yards to the Bears.

“We were physical,” said Dominique. “We had some meltdowns at times, but (defensively) they don’t break.