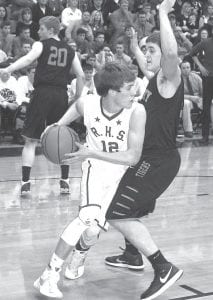 Derek Walker (12) looks for a teammate to pass to in Archbold’s NWOAL game with Liberty Center, Friday, Feb. 5.– photo by Scott Schultz

Tinora (10-8) jumped out to a 4-0 lead, but the Streaks went on a 10-0 run that was punctuated by Mike Weigand dropping in a three at the buzzer for an 18-11 first-quarter advantage.

Archbold poured it on in the second stanza, outscoring its host 24-15 for a 42-26 halftime lead.

Tinora used its inside strength in 6-foot-5 Logan Bailey, who is headed to Findlay University to play football.

The Rams scored 18 points in the third to the Blue and Gold’s eight, but still trailed 50-44 to start the final eight minutes.

Tinora trailed by two points midway through the fourth, but AHS, led by 24 points from Eli Miller, including five of Archbold’s 14 three-pointers, held off the Rams for the win.

Bryce Williams and Kaiden Bedsole dumped in 17 points each. Bedsole had four treys while Williams had three.

“Bailey is a horse in there,” said Doug Krauss, AHS head coach. “He got a couple of extra put-backs in there that he shouldn’t have, but I thought overall we did a decent job on him.

“That shouldn’t have bothered us, but that second half Tinora took it to the rack hard and we didn’t have an answer for that. We have to get better.”