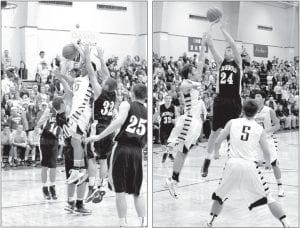 Left: Pettisville’s David Reyes (23) drives through traffic and gets fouled in the Blackbirds’ non-league contest with Archbold, Saturday, Dec. 22, in the Bird Cage. He scored seven points. Right: Archbold’s Luke Fisher gets off a shot in the fourth quarter. The sophomore was one of three Blue Streaks in double figures; he finished with 10.– photos by Phil King

Archbold came into the contest sporting a 5-1 record while Pettisville stood at 3- 2.

As in any rivalry, records are thrown out the window and bragging rights are at stake.

The Blue Streaks returned home with a 65-40 victory and bragging rights for another year.

The game started at a furious pace with Archbold’s Jay Miller scoring a bucket and getting fouled in the process for an early 3-0 lead.

A Pettisville turnover and a Zeb Frank three-pointer gave Archbold a quick 6-0 lead.

Pettisville went an 8-0 run with two free throws by Jacob Valdez, a Dominic Frey layup, two more free throws by David Reyes, and a jumper by Tanner Rufenacht for an 8-6 lead.

Evan Wyse scored the next four points to give the Streaks a 10-8 advantage.

Austin Dykstra tied the score with a layup, and Rufenacht gave Pettisville its last lead of the evening with a three to make the score 13- 10.

Archbold ended the period with an 8-0 run with an E. Wyse layup, back-to-back Tyson Dietrich buckets, and a Devin Shannon layup for an 18-13 first-period advantage.

Both teams were cold from the field in the second, but warm at the charity stripe. Archbold was 1-5 from the field thanks to a Frank trey, while Korben Rychener scored the only bucket for PHS, who was 1-6 from the field for the period.

Luke Fisher started the scoring in the second half for Archbold with a put-back.

Both teams exchanged buckets with Frey scoring on two layups and Dykstra on a jumper, and Dietrich with a jumper and free throw to make the score 38-30.

The Blackbirds got no closer as Archbold went on a 10-0 run on the strength of six Frank points.

Reyes stopped the run with a trey, but Frank answered with a three of his own in transition to give AHS a 51-33 lead.

Rufenacht ended the third with a three for PHS to close the gap to 51-36.

The fourth proved costly for the Birds as they mustered only four points.

Three Streaks were in double figures. Frank led all scorers with 15 points. Dietrich scored 14 and Fisher chipped in 10.