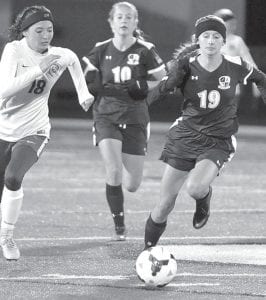 Archbold’s Dakota Stamm (19) and Chippewa’s Isabella Braman (18) race for the ball in their regional semifinal.– photo by Mario Gomez

The Archbold girls soccer team took its 19-0 record and number four ranking to Sandusky, Tuesday, Oct. 31, to battle Doylestown Chippewa (16-1-2), the number two team in Division III who advanced to the state tournament the past two years.

Leading 2-1 at the half, the Streaks scored two more goals for a 4-1 victory.

“We came in thinking we were the underdogs,” said Jen Kidder, AHS assistant coach.

“We had five really scary minutes in the beginning, but after that we dominated play.”

Sporting a 16-0-2 record, BaileeFerrellgavetheChipps a 1-0 lead on a free kick with only 5:28 off the clock.

Less than two minutes later, Emie Peterson took the ball down the right sideline and slipped it past Chippewa keeper Angela Cancarevic to tie the score.

“Getting that goal and them seeing that they are right there in the game– that’s what they needed,” said Kidder.

The Streaks seemed to have the momentum for most of the first half, maintaining possession on the Chippewa side of the field.

With 10:28 remaining in the first half, Chloe Nofziger booted a corner kick that sailed directly onto the head of Andi Peterson.

The junior midfielder knocked the ball into the goal to give AHS a 2-1 lead that lasted the rest of the half.

Early in the second half, Chippewa pressed the Blue Streak defense, looking to score the equalizer.

Archbold continued to attack on the offensive end, and E. Peterson collected her second goal with 17:42 left.

The ball bounced the right way for Archbold the rest of the night.

E. Peterson scored her third goal of the night for the hat trick with just over a minute left to seal the win and advance the Streaks to the regional final against Liberty Benton.