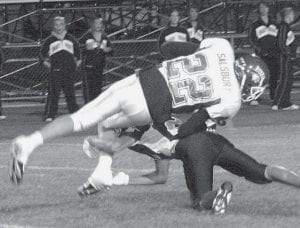 A Blue Streak defender wraps his arm around the right leg of Delta’s Drew Salsbury and topples him to the ground. The Streaks scored 21 first-quarter points on their way to a 35-7 NWOAL victory.- photo by Scott Schultz

The Archbold Blue Streaks, under John Downey, head football coach, upped their record to 7-0 and their Northwest Ohio Athletic League mark to 5-0 with a 35-7 win over visiting Delta, Friday, Oct. 3.

Opening with 21 unanswered points in the first quarter, AHS picked up the win, marking the first time since 2002 that the Streaks have opened with seven straight wins.

“We came out and took care of business early,” said Downey. “We didn’t finish it like we would have liked, but the bottom line is we got a win.

“Now we get to the money games.”

“We are happy with our product, but not happy with the outcome,” said Brett Smith, DHS head coach. “We are working really hard to put forth a good effort and execute on the offensive line.

“We got inside the 15-yard line two times and we just couldn’t produce any points. When you get a start like that it’s tough.”

Taking the opening kickoff, Archbold scored on the first play from scrimmage when David Rupp raced 79 yards for the opening score.

Rupp went on to score a total of four touchdowns and led the Streaks with 145 yards on 13 carries. Fidler was right behind with 136 yards on 16 carries.

The Panthers got on the scoreboard when Austin Alig connected with Korbin Smith for a 43-yard touchdown toss at the 1:15 mark of the opening quarter.

Smith’s touchdown catch was Delta’s only score of the night, after Archbold’s defense tightened.

But on the offensive side of the ball, the Streaks came to a halt.

“We came out and played really well the first half and then we just got real lethargic,” said Downey. “The second half we were just not sharp and crisp on both sides of the ball. We will just forget that and get ready for PH.”

Rupp scored his third touchdown in the second quarter. The Delta defense shut out AHS in the third.

Archbold didn’t score again until the two-minute mark of the final period when Rupp crossed the goal line on a 46- yard run.

It wasn’t just the Delta defense that picked up its intensity after giving up 21 points in the first quarter; the Streak defense gave up a total of 179 yards, holding the Panthers to minus-18 yards rushing but giving up 197 yards in the air.

The AHS defense came up with three interceptions by Rupp, Breon Price, and Trey Westrick.

“We had trouble running the ball tonight,” said Smith. “Give credit to Archbold’s front seven- they handled us pretty well.”

Then there were two.

Well, that cliché is usually left for the end of the season, but for Archbold, ranked second in Ohio in Division V by the Associated Press, and Patrick Henry (7-0, 6-0 NWOAL), ranked third, a showdown is set for Friday night, when the Streaks make the long trek deep into Henry County.

Up for grabs: a possible league title, since both are undefeated.

The Streaks have not dropped the Patriots since 2001, when they won 35-21, but hold a 21-16-1 overall record against their league rivals.

A quick look at the key players: on the offensive side for Archbold, who averages 39.6 points per game, Fidler leads the ground game with 1,069 yards on 122 carries. He has crossed the goal line 15 times.

The Patriots, who are averaging 44.4 ppg, counter with Justin Buenger, who has 16 touchdowns on 66 carries and 853 yards.

The Streaks have versatility in Rupp, who has chewed up 697 yards on 93 carries and 13 touchdowns. He also has passed for 795 yards and five TDs.

George calls the signals for the Pats. He’s completed 66 passes for 982 yards and 11 touchdowns.

On PH’s receiving end, Mitch Leonard leads the way with 398 yards and four touchdowns. George passes the wealth around; Brian Kline and Austin Bower each have caught three TDs, and Clay Mass has one.

For AHS, Fidler and Trey Westrick each have 215 yards and Price, 167 yards, receiving. Fidler leads the team with three TD catches.

A quick look at the special teams has PH’s Luke Creager connecting on 31 points after touchdown. On the AHS sideline, Aaron Bontrager has 30 PATs and has connected on five of six field goals, with 39 yards being his longest.

No individual numbers are available for the PH defense, but they have only given up 76 total points, an average of 10.9 ppg., while committing only three turnovers. The Patriots have intercepted the ball 11 times.

This game should go down to the wire. Turnovers will be a key, as will special teams play.

This promises to be a barnburner.