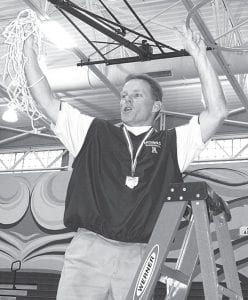 Above: Brian Ziegler, AHS head girls basketball coach, victoriously holds up the basketball net with one hand and holds up two fingers with the other, signifying the second straight Division III district championship for the Blue Streaks. It was also the second time this season that Archbold defeated Ottawa-Glandorf: once in the regular season, and once in the district final.

The hearts of Blue Streak fans were in their throats as the 3/4-court shot at the buzzer by Ottawa-Glandorf’s Elissa Ellerbrock rimmed out, giving the Archbold girls basketball team its second straight Division III district championship, Saturday, March 2, at Kalida.

Down by as many as seven points in the third quarter, the Streaks came back to win 40-37.

“It was a battle,” said Brian Ziegler, AHS head coach. “We knew it would be his time of year.

“(It was a) close game the first time around (AHS won 53-51 on Feb. 12 in the last game of the regular season). Our girls just kept battling and battling.

The Streaks (24-1) advance to the regional tournament for the 11th time, where they were scheduled for a rematch with Liberty-Benton (20-5), last night, Tuesday.

The Eagles beat the Streaks 40-32 in a regional semifinal last year.

Left: Cassidy Wyse keeps her eyes on the basket and drives the lane in the district final. She finished with 12 points, and was the only scorer from either team in double figures.– photos by Mary Huber

“We didn’t play very strong the first half, and they got us on our heels,” said Ziegler.

“We started getting the ball where we needed to start our offense. That was the main thing.

“That starts at the point guards, both Cassidy (Williams) and Taylor (Coressel.) Then we got it to the wings where we needed to and we got some lobs.

“As soon as we got some lobs and were able to score, then we got it going.”

The Streaks ended the third period down by five, 33-28.

“Things weren’t looking real good for us, but we kept battling as a team and made some plays,” said Ziegler.

“There’s no quit in them. They’ve played in big games, and know how to compete.”

Down 37-36 with 1:35 left in the contest, Coressel was fouled on an offensive rebound.

With the Streaks in the double bonus, she stepped to the free-throw line and sank both shots to give Archbold a 38-37 lead it would not relinquish.

“We played stronger in the second half, and did a nice job on the boards,” said Ziegler. “Taylor had a big rebound and got fouled, and hit two big free throws.”

After Dani Ellerbrock missed two free throws for O-G, Williams gave AHS a two-point cushion with 23.4 seconds left, hitting one of two at the foul line.

O-G’s Alex Verhoff put up a shot but missed. Jesse Fidler grabbed the rebound and was fouled with 1.5 seconds on the clock.

She made the first but missed the second. E. Ellerbrock grabbed the rebound, took a few steps and put up the “Hail Mary” shot for OG that rolled out, ending the Titans’ season at 16-9.

Archbold’s Cassidy Wyse was the only player in double figures, with 12 points as Archbold was 14-31 from the field while O-G was 11-35.

“I’m proud of our girls and excited for them,” said Ziegler.

“Our girls competed against a very good team. Ottawa- Glandorf played hard. It was a great atmosphere.

“We survived, and that’s what it’s all about.”