Blue Streaks Host Coldwater In Opening Round Of State Playoffs

Members of the AHS student body shine the lights on their phones to signify the party’s over for the Wauseon Indians. The Streaks shocked the Indians 38-0 to win the Lions Club trophy for the third straight year.– photo by Mario Gomez

Coldwater, who finished sixth in Division VI, Region 23, has qualified for the playoffs for 23 straight years (1997-2019), a new state record, and 25th overall.

The Cavaliers (8-2, #2 in last week’s Associated Press poll) play in the Midwest Athletic Conference, where they finished fourth with a 6-2 record.

Coldwater is 73-18 in playoff appearances for a winning percentage of .802.

The Streaks, who jumped from fifth to third in Div. IV, Region 23 with Friday’s win over Wauseon, are making their 13th playoff appearance and have one state title (1988) and a state runner-up finish (1982) while appearing in the state semifinals five times. 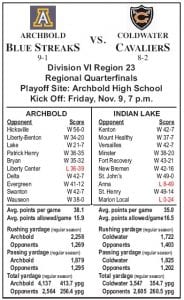 Archbold is 16-11 in playoff appearances.

“Coldwater is one of the best programs in the state, and it is very evident watching their film that they have a number a great athletes that are well-coached,” said David Dominique, AHS head coach.

“They make very few mistakes and are battle-tested, so we will need a great week of preparation in order to be ready for them come Friday night.”

Jake Hammellgarn leads the offense for the Cavaliers.

The senior signal caller passed for 1,788 yards on 140-216 passes with 18 touchdowns and three interceptions. He is the leading rusher with 761 yards on 106 attempts with 14 touchdowns.

Nate Grieshop, a senior, has rushed for 326 yards on 50 carries and has six touchdowns.

Noah Miller, a senior, is the top target for the Cavs, catching 39 passes for 502 yards with four touchdowns.

Will Broering, a senior, and Zack McKibben, a junior, contribute to the Coldwater passing attack with 371 and 370 receiving yards, respectively. They combined for eight touchdowns.

Archbold is led by sophomore quarterback DJ Newman, who was 93-141 passing for 1,429 yards and 14 touchdowns, with five interceptions. He rushed for 550 yards and seven touchdowns.

Noah Gomez, a junior, rushed 101 times for 745 yards in an injury-shortened season. He scored 10 touchdowns.

Antonio Cruz, a junior, had 46 receptions with 725 yards and 10 touchdowns to lead the Streaks.

Elijah Zimmerman, a senior, had 18 receptions for 350 yards with four touchdowns.

Brandon Taylor, a junior who made the switch from quarterback to wide-out, finished with 19 receptions and 276 yards with two touchdowns.

Defensively, Coldwater is led by Russell Klosterman, a senior with 73 tackles; Grieshop, 66 tackles; and Josh Hrycko, a senior with 57 tackles and 4.5 quarterback sacks.

Carson Meyer, a junior, leads AHS in tackles with 85, followed by Zimmerman with 60.

Matthew Gladieux, a senior, leads the Streaks with six sacks. Caleb Ranzau, a junior, chipped in with five sacks.

Zimmerman leads the team in interceptions, with three.

For the first time since 2001, an undefeated record wasn’t enough to qualify for the playoffs. Northwood (Div. V, Region 18) and Gibsonburg (Div. VI, Region 23), both went 10-0 and didn’t qualify.

Newcomerstown was the last school to go undefeated but not make the playoffs, in 2001.

The OHSAA football playoffs were expanded to eight teams per region in 1999.