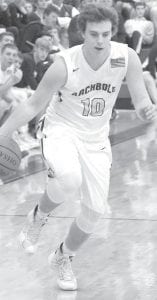 The duo gave the Streaks a 10-2 lead just minutes into the game on Archbold’s way to a 58-50 victory.

Welch started with a drive for two. Following a Tiger basket, Bedsole buried his first of three first-half three-pointers.

Welch added two more and Bedsole dumped in another three.

Mike Weigand added a deuce for a 12-2 advantage with half the period gone, and LC (9-14) never recovered.

Bryce Williams, who led the team with 17 points, scored the next seven points for AHS and the Streaks led 19-4 with the first quarter in the scorebook.

The Tigers outscored the Streaks 19-16 in the second but still trailed 35-23 at the half.

LC cut the difference to nine at the halfway mark of the third and seven, 45-38, to close out the third.

“It helps when you come out and make a few shots to start the game,” said Doug Krauss, AHS head coach.

“This was a tale of two halves. Liberty comes after you so hard in the second half it was hard to get good looks. I like the fact that we were aggressive getting to the rack.

“Liberty is a scrappy team and they play hard, and I thought our kids played hard, also.

Bedsole and Eli Miller each chipped in 12 points in the win.

LC was led by double-digit scoring from Brooks Hinton and Joel Studer, scoring 14 and 10 points, respectively.