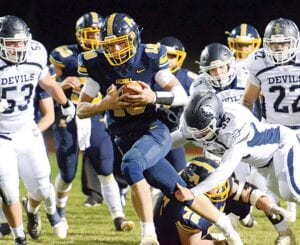 Quarterback DJ Newman, who rushed for 117 yards on 15 carries, speeds past the Carey defense, Saturday, Oct. 24.– photo by Mario Gomez

Archbold never trailed Carey in its regional football quarterfinal, Saturday, Oct. 24, at Blue Streak Field, but was tested throughout, holding on for a 35-28 win.

“It wasn’t pretty all night, but at this point in the year you have to win and advance,” said David Dominique, AHS head coach.

“That’s a good physical football team with a lot of good players.

“Our offense– at times tonight, we were our own worst nightmare. We had a lot of mistakes. I like the way our guys hung in, but we’ve got a lot to improve on.”

Archbold recovered a pooch kick by Carey (7-2) at its own 46-yard line, but a nine-play drive ended in an unsuccessful field goal attempt.

The Blue Devils (7-2) went three-and-out on their first possession, and gave Archbold another short field with a punt to its own 36.

Carey took advantage of a pass interference penalty and tied the score on a Derek Lonsway-to-Bryce Conti 36- yard touchdown pass.

Archbold’s bad snap and punt gave Carey the ball at its own 37, but the Blue Devils turned the ball over on a fourth-down fumble.

Starting at its own 36, AHS scored on a one-yard touchdown plunge by Noah Gomez on a six-play drive to lead 14-7.

Carey returned the kickoff to the Archbold 47 and scored nine plays later with a Lonsway-to-Conti pass on fourth down from the 5 to tie the game at 14 with 3:42 left in the first half.

Archbold struck fast with a four-play drive that covered 69 yards, ending with a Newman-to-Antonio Cruz 34-yard touchdown pass for a 21-14 halftime lead.

“We talked at halftime to try to get a two-score lead and really put the pressure on them,” said Dominique.

The Blue Devils took the second-half kickoff and drove to the Archbold 35, but Charlie Krieger forced and recovered a fumble to stop the drive.

Another Blue Streak defensive stop gave them the ball at their own 47.

Newman connected with Jaden Schulze for a 17-yard pickup to put the ball at the Carey 36.

Carey answered with an 11- play, 65-yard drive that ended with a Brady Curlis one-yard touchdown, closing the gap to 28-21 early in the fourth.

Newman raced from his own 27 to the Carey 1 on the next drive, but a holding penalty erased a chunk of the yardage and moved the ball back to the Archbold 48.

After moving to the Carey 29, Newman found Schulze in step for Archbold’s final points of the night and a 35- 21 lead.

Brandon Taylor inter- cepted Lonsway on the next Carey possession, but the Blue Devils got the ball back at the Blue Streak 40 and moved to the 1-yard line with a 39-yard reception.

Curlis scored on a oneyard plunge to pull within a touchdown, 35-28, with 2:04 remaining.

The hands team was on deck for the Streaks as the onside kick floated into Taylor’s hands.

With Carey out of timeouts, the AHS offense ran out the final two minutes.

“We had some issues early on,” said Dominique.

“They had some good d-lineman in there and we couldn’t get them moved, but I think we stuck to the run game, and it really helped us in the second half.”

Newman completed 13-22 passes for 204 yards and a pair of touchdowns with one interception. He rushed for 117 yards on 15 carries with two touchdowns.

Gomez rushed for 70 yards with one touchdown.

Cruz snagged four passes for 84 yards with a touchdown.

Lonsway completed only 5- 14 passes but had 140 yards and two touchdowns with a pick. He led Carey’s ground game with 71 yards on 23 rushes.

Conti had 116 yards receiving on four catches with two touchdowns.