Blue Streaks Go 1-1 For The Week 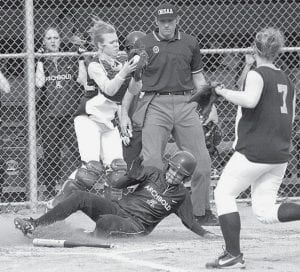 The Archbold softball team got two games in last week, splitting the contests.

An April 10 contest with Pettisville was cancelled, as was an April 12 meeting with Crestview, Parkway, and Evergreen.

The story of the game was pitching, as Lauren Kern threw a three-hitter, while the Streaks were limited to two hits.

A scoreless tie in the fourth inning was broken by a threerun uprising by the Generals. Although collecting only two hits in the inning, a walk and two Streak errors contributed to their downfall.

Kern threw a strong game. She gave up one earned run on three hits while striking out six and walking one.

The Blue Streak offense could get nothing going as only Adi Lange and Stacy Wyse collected hits.

“The story of the game was our inability to put the ball in play with any authority, and Anthony Wayne taking advantage of a couple of bloop hits,” said Joe Frank, AHS coach. “We will continue to work hard on our hitting because it is, without question, our biggest weakness at this point in time.

“We have seen some good pitchers, and a lot of credit has to go to them, but we are going to have to find a way to scratch out a couple of runs in these types of games. We have people who are capable hitters, but we haven’t shown it up to this point in time.

“We will continue to search for the right combination to make us the most competitive team that we can be. We aren’t that far off from being 5-1 or 4- 2, so we are not going to press the panic button. We will continue to work hard and we will improve.

“Confidence is an issue, and we need to have some success to feel good about our chances at the plate. We will work our way out of this funk that we are in and when we do, we will be just fine.”

The Streak bats were awakened as they pounded out 12 hits and won a five-inning 11-0 decision over Edgerton.

AHS used a big five-run first inning to get things rolling. Andrea Allan and Kern each singled and Lange walked to load the bases. With one out, Alyssa Schaub laced a two-run single to left field, and Dani Newman hit a run-batted-in single.

The Streaks came back with three more in the second as Kern and Allan each singled and Lange walked for the second time. With one out, Courtney Day singled in a run. Schaub singled in another run to pad the lead.

The Streaks scored three more runs in the third. Devin Newman led off with a triple and scored on Allan’s third hit of the day. Schaub also singled in her fourth runner in the inning.

Allan and Schaub each had three hits to lead the attack while Kern had two hits.

Kern threw the first three innings and faced the minimum nine batters. The Bulldogs collected only one hit- a double, but the runner was erased attempting to steal third base on a throw from Morgan Ducey.

Lex Campos threw the last two innings and gave up no runs and no hits. Kern struck out four and Campos, three.

“It was good to see us take some good aggressive swings today,” said Frank. “We needed this game for our confidence, and hopefully we can keep bats hot.

“Lauren (Kern) has thrown two good games in a row, and she will have to continue that for us to be successful.

“We open the league portion of our schedule next week. We will have to be ready to defend our Northwest Ohio Athletic League title.”