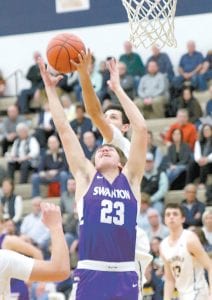 Archbold (22-0) defeated Swanton 66-46, Thursday, Feb. 21, in the Thunderdome to finish 7-0 in the Northwest Ohio Athletic League and claim their first outright title since 2012.

“It was a good battle,” said Joe Frank, AHS head coach. “I don’t think we played our best game, but at the same time, you’ve got to give Swanton credit.

“It’s been a dream season so far. We didn’t really talk a whole lot about going undefeated. We just talked about going out, playing hard and getting better.”

It was one last go-round for six AHS seniors playing their final game on the Thunderdome court. 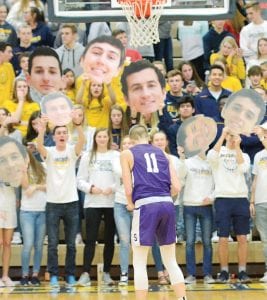 Ramos and Williams scored the first 11 points jump out to an 11-6 lead.

Swanton scored the first six points of the second quarter to pull within three, 21-18.

Elijah Zimmerman stopped the run with a three-pointer, but the Bulldogs scored seven straight points to take their first lead, at 25-24.

Dean Croskey scored the final bucket of the half to give the Bulldogs a 27-26 halftime advantage– the first time Archbold trailed going into the locker room since their Dec. 22, 2018 contest against Ottawa-Glandorf.

“I thought we tried to take some things that weren’t there instead of just taking what they gave us,” said Frank.

“We were a little bit more aggressive in the second half on both ends.”

Locking Down A Title

Swanton’s Jared Wilson scored the opening bucket of thesecondhalf. Williams answered with a three, but Andrew Thornton came back with a three of his own for a 32-29 lead with 6:58 left in the period.

Archbold flexed its defensive muscle and held the Bulldogs to just three more points the remainder of the quarter while scoring 14 to take a 43-35 lead going into the final eight minutes.

After a Zimmerman free throw, Swanton scored on a Wilson jumper and a Justyn Bartlett three to pull to within four, 44-40.

Mahnke drained two straight from behind the three-point arc to push the lead to 10, 50-40.

Archbold then held the Bulldogs to six points while scoring 16, including three straight Ramos treys.

The seniors were replaced late in the quarter and received a standing ovation.

It was only fitting that a senior– Hogrefe– scored the final points on a steal and layup for the 66-46 win.

“We knew going into our senior year we had to have that shark mentality that this is our court, our ocean, so when teams come in here, we have to own the moment.”

“We’ve been grinding every day to get better,” said Williams. “A lot of people counted us out since we lost a lot from last year, but we knew we would be good.”

“This group is just a special group,” said Frank. “They’ve risen to every challenge that’s been put in front of them and been able to withstand that challenge and come out on top.”

Ramos led all scorers with 18 points, including four of the team’s 10 three-pointers.