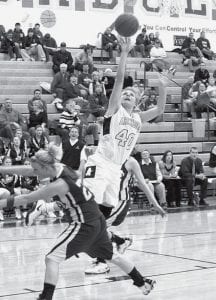 Archbold overcame an 11- point deficit to tie the game at 35, but the Streaks couldn’t quite get over the hump and lost to Holgate 54-48, Monday, Dec. 29 in non-league girls basketball action at The Thunderdome.

AHS, which dropped to 8-3, never led in the contest.

After the Streaks called a time-out at the 2:27 mark, they scored four straight baskets to tie the score.

Andrea Allan scored first, followed by Alyssa Schaub sinking a basket after the Blue Streaks stole the ball. Stacy Wyse scored two straight baskets, the second on a fast break, to knot the score at 35.

Holgate’s Elizabeth Steingass was fouled while shooting with 0.9 seconds left. She made both free throws, and the Tigers took a 37-35 lead entering the final eight minutes.

The Tigers made six of eight free throws in the last two minutes to preserve the victory.

"Defensively they took us out of what we were trying to do. They killed us on the offensive boards. You can’t give a team like Holgate second opportunities and expect a win.

"We’ll have to learn from this to make us better."

Allan was the only Blue Streak in double figures, with 11 points.

With the score tied at 33 after three quarters, Archbold (9-3) exploded for 13 fourth-quarter points while holding Napoleon (6-4) to a single bucket on its way to a 46-35 non-league road victory, Saturday, Jan. 3.

"This was a nice way to bounce back after Monday’s loss," said Ziegler. "We did a nice job holding our composure when Napoleon tied the score in the third.

"A 13-2 advantage in the fourth was led by us going 6-6 at the free-throw line. The entire team did a nice job stepping up with the absence of Andrea Allan, who went out with an injury."

Abbey Graber was the only player on either squad in double figures, with 13 points.