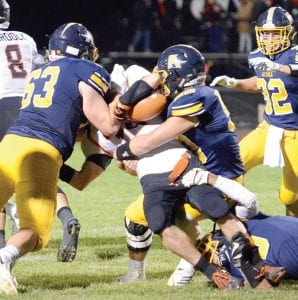 The Blue Streak trio of Matthew Gladieux (63), Carson Meyer, and Adrian Juarez (on ground) gang up to tackle Liberty Center’s Zach Bowers in their NWOAL battle, Friday, Oct. 4. Bowers led the Tigers with 124 yards on 18 attempts with two touchdowns as LC kept its record unblemished with a 39-36 victory.– photo by Mario Gomez

In a battle of state-ranked unbeatens, Archbold led 21- 7 with 9:36 left in the first half, but Liberty Center scored the next 25 points on its way to a 39-36 Northwest Ohio Athletic League victory, Friday, Oct. 4, in front of a sold-out crowd at AHS.

“Our lack of discipline really shot us in the foot at the end, but that’s something that we can clean up.”

Archbold opened with a 15-play drive that chewed up more than seven minutes and ended with a DJ Newman to-Antonio Cruz 5-yard touchdown pass for a 7-0 lead. 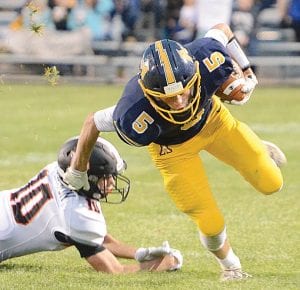 Brandon Taylor (5) manages to evade a tackle by Liberty Center’s Trey Patterson (10), staying on his feet to get extra yardage.– photo by Mario Gomez

After stopping the Tigers on fourth down, AHS moved down the field and opened a 14-0 lead on a Newmanto Brandon Taylor 27-yard touchdown pass.

LC used the arm of quarterback Camden Krugh and scored on a 64-yard touchdown pass to Trent Murdock.

The Streaks answered with a seven-play, 72-yard drive that ended with a Newman 8-yard touchdown run for a 21-7 advantage.

The Tigers scored on a Krugh-to-Murdock 74-yard touchdown pass, cutting the difference to 21-13.

After an Archbold punt, the Tigers scored in four plays on a Zach Bowers 26- yard run to trail 21-19.

After Newman was intercepted, LC took possession at the Archbold 48.

Krugh crossed the goal line from 1 yard out in six plays, giving LC a 25-21 halftime lead.

The Tigers scored on their first possession of the second half on a Krugh-to-Alex Righi 8-yard pass to increase the lead to 32-21.

Archbold finally ended its scoring drought in the fourth quarter when Caleb Hogrefe finished an 11-play drive with a 3-yard touchdown run followed by a Newman twopoint conversion run to pull the Streaks within three, 32- 29, with 9:42 remaining.

LC responded with a drive that took nearly five minutes off the clock and scored on a Bowers 21-yard run to go up 39-29.

A Newman-to-Elijah Zimmerman 27-yard touchdown pass with just one second left resulted in the 39-36 final.

“I told the guys to remember that score because who knows what can happen,” said Dominique. “We might see them again.

“We’ve gone through a stretch right now of a lot of tough teams. Our league is tough.”

Newman was 19-38 in passing with three touchdowns and three interceptions. He rushed for 66 yards with a touchdown.

Hogrefe rushed 12 times for 66 yards and a touchdown.

Krugh was 8-13 passing with three touchdowns.

Bowers tore through the Streak defense for 124 yards and two scores.