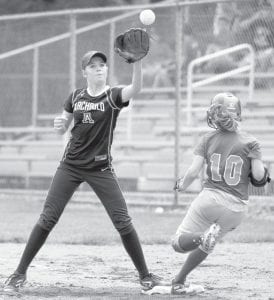 In one of the game’s controversial calls, Edison’s Kristin McCarthy (10) is called out at first base, but the ball hasn’t yet reached Cassidy Williams’ glove.– photo by Mary Huber

Archbold jumped out to a 2-1 lead after two innings, but Edison scored the last nine runs of the game to win the Division III regional softball championship 10-2, Saturday, May 26, at Ashland.

Archbold trailed 1-0 heading into the bottom of the second. Mindy Rupp led off with a single.

With one out, Ruthie Beck singled. Becca Gerig followed with a run-batted-in double to tie the score at 1.

After a Chelsea Goebel walk loaded the bases, Cassidy Wyse hit a long sacrifice fly to center field to give AHS a 2-1 lead.

Edison regained the lead in the third with two singles, a walk, and an error to make it 3-2.

The fourth inning was the downfall of the Streaks as Edison’s pitcher, Susan Knight, hit a grand slam home run with two outs to make it 7-2.

The Chargers (30-1) tacked on three more runs in the sixth to put the game away as they collected four hits in the inning.

The Streak offense shut down after the second inning as it managed only two base runners in the last five innings. 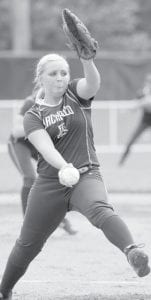 Knight (27-1) was in control on the mound. She gave up five hits, all in the first two innings. B. Gerig led the way with a single and double.

“I am really happy for the seniors and the year that we had,” said Joe Frank, AHS head coach.

“They have been a part of three straight Northwest Ohio Athletic League titles, three district titles, and one regional championship.

“They will truly be missed, not only as softball players, but because they are great people.

“They should be proud that they did their part to keep the rich tradition of Archbold softball alive and well.

“The underclassmen also played a key role in the successes that we had this year, and we will be counting on them to step up and lead next year’s team. 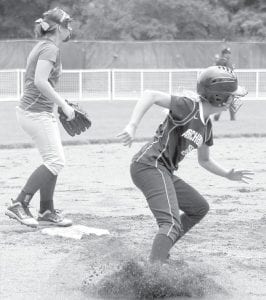 Taylor Coressel slides to a stop after rounding third on a double by Becca Gerig in the second inning. She scored two plays later on a long sacrifice fly to center field by Cassidy Wyse, giving AHS a 2-1 lead.– photo by Mary Huber

“I have said it before and I will say it again, I am truly blessed to be head coach of such a great program. Our assistant coaches, Dan Rychener and Greg Kuhlman, do a great job with the team, and we all know that we have great players that work very hard for us.

“It has truly been another successful year for the Archbold softball program.”