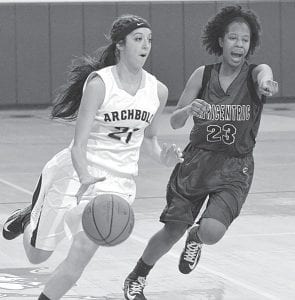 Archbold got off to a good start against Columbus Africentric in the Division III girls basketball regional final, Saturday, March 9, leading 14-11 after the first period.

But the Streaks weren’t able to maintain the momentum, and were outscored 14- 7 in the second period, 13-9 in the third, and 22-12 in the fourth as the Nubians (21-5) won the regional championship, 60-42, to advance to the state tournament in Columbus.

It will be the fifth state appearance for the defending Div. III state champions.

“It seemed to steamroll at one point, to where they got some turnovers and started building off their lead.

“We had some good rebounding positions, didn’t get a couple of calls, and then one thing leads to another and that’s the way basketball goes.

“But you know what? I’ll lose like we did any day compared to how they took winning.

“I’m proud we could handle the loss and hold our heads up high with class. It’s unfortunate our opponent couldn’t do the same in the win.”

“What I told them you can’t put in print. But the gist of it was, let’s play with a little more intensity and let’s act like this is a regional championship game,” he said.

“I had a couple of girls pouting… the time-out was just to get them refocused.”

The Nubians scored the period’s last five points and were down by three, 14-11, after one.

Africentric tied the score at 16 as 6-feet-2 Marley Hill scored off an offensive rebound, one of 13 rebounds she had in the game.

“We had too many turnovers and the game was too many second and third opportunities that they could get,” said Ziegler.

“Their 6-2 girl (Hill) had too many offensive rebounds and put-backs, and you can’t do that against a good team. We knew what we were up against.”

Darianne Seward hit a three-pointer for Africentric, giving the Nubians a lead they would never relinquish.

Archbold closed within one, 21-20, on a Hannah Hesterman bucket. It was the closest the Streaks would get, as Africentric took a 25-21 lead into the locker room.

Archbold was still in reach after three as the Nubians led 38-30, but Africentric led by as many as 20 points in the final period, dashing the Final Four dreams of the Blue Streaks.

Hill led a quartet of Nubians in double figures, with 14 points.

Cassidy Williams was the only Blue Streak in double figures, with 10.

The Nubians won the re bounding battle 37-32, and committed 27 turnovers to Archbold’s 21.

“In that second half, our ball pressure just kind of went the way we wanted it to go,” said McKinney.

“The good thing about this game, Archbold liked to press and play up and down, and we like to do the same thing, so we was kind of prepared for them doing that.”

“I’m so proud of our girls tonight. They fought so hard,” said Ziegler.

“I can’t say enough about the season we’ve had, and the work ethic we’ve had all year,” said Ziegler of the Streaks, who finished 25-2.

“It hurts when you see your two seniors play their final game, seniors that gave so much in their careers.

“Taylor (Coressel) did an awesome job handling the ball against some tough pressure, and Darian (Oberlin) battled hard.

“We had a great season and a great run, and you’ll never take that away from us.”