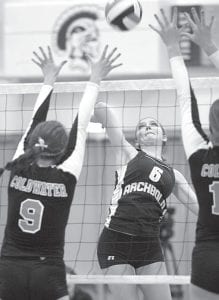 Archbold’s Desi Newman (6) spikes the ball between a pair of Coldwater blockers in the Blue Streaks’ Division III regional semifinal with the Cavaliers, Thursday, Nov. 1.– photo by Mary Huber

The Streaks “played hard in the first three games, and they played harder the last two.

“I’m proud of the girls. I think there’s a lot of people that thought this was over in the fourth, and I thought the girls battled hard.

“Give Coldwater credit. They chased a lot of balls down and they still played aggressive.”

Archbold jumped out to an 8-3 lead in the first game, but Coldwater battled back to take a 16-13 lead.

The score was tied at 19 when Macy Reigelsperger’s kill gave the Cavs a 20-19 advantage. 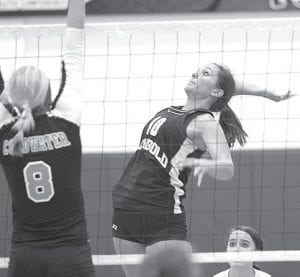 Above: Senior Jenny Lehman led Archbold in attacks with 15 kills against Coldwater. The Cavaliers defeated the Streaks in five games to advance to the Division III regional final at Findlay, where they lost to Columbus Bishop Ready. Left: Darian Oberlin, also a senior, tips the ball over the net.– photos by Mary Huber

Kelsey Rammel’s serve went into the net for Coldwater, giving the serve back to AHS.

Becca Gerig’s kill gave the Streaks the lead for good, 21-20. After a Coldwater dig was blocked by Desi Newman at the net for a 22-20 lead, Mike Etzler, CHS head coach, called a time-out.

A Gerig kill put the difference at three, 23-20, but the side-out went back to Coldwater after Jenny Lehman’s serve went long.

The Cavaliers were penalized on a lineup call (one of the players moved too early before the serve), putting AHS at game point.

After an Archbold error at the net, Archbold led 24-22. Coldwater’s Lauren Leugers stepped back to serve and served the ball into the net, giving AHS the first game.

Coldwater never trailed in the second game, and after trailing 2-0 in the third game came back to tie the score and took the lead for good at 3-2.

Coldwater led 15-10 in the fourth game, but AHS battled back and tied the score at 16 with two straight aces by Desi Newman. The lead then went back and forth until Lehman’s kill gave AHS a 21-20 advantage.

AHS won when Leugers’ desperation hit went out of bounds, sending the match in to a fifth game.

“We came into that fourth game, and I knew the girls hadn’t given their all,” said Rufenacht. “I challenged them right there and I said, ‘I know you girls are going out there and giving me everything and I think you have more to give,’ and they proved that.”

Coldwater was at match point, 14-12, but the Streaks tied the score on a failed block and a Leugers spike that went long.

Reigelsperger’s kill put Coldwater back on top 15- 14, but Lehman’s kill tied the score at 15. CHS took the lead again, and then a Cavalier was called for two hits, tying the score at 16.

“Looking at that score in the fifth game when we were down 9-12 and we still did not give up and battled till the end,” said Rufenacht. “You know, it didn’t go our way tonight, but I know this team left it on the floor.”

Archbold finished the season with a 23-3 record and won the Northwest Ohio Athletic League with an 8-0 record.

“It was a great season,” said Rufenacht.

“These kids are quality kids through and through, not just on the volleyball court. They’re great students. They’re great athletes. A lot of them play two-three sports, and they’re just quality kids. I wouldn’t trade any of them.

“They’re not that loud flashy team, but they go in there and get the job done, and they know what it takes.”

“It’ll be a big loss. They’re some quality kids there,” said Rufenacht.

“All my seniors stepped up into huge leadership roles this year. Maybe they weren’t on the floor all the time, but they still stepped up and they led this team on and off the court and in practice, and they’re great kids.”