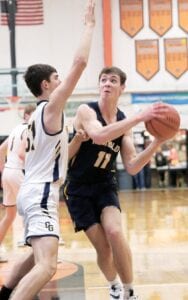 Ashton Kammeyer, a junior, powers his way to the basket against O-G’s Theo Maag. Both are 6-5. Kammeyer led AHS with 18 points.– photos by Mary Huber

After losing its regularseason meeting with Ottawa- Glandorf by 21 points, 57-36, Archbold knew it would be a huge task to get past the Titans in their Division III regional boys basketball semifinal at Elida, Wednesday, March 10.

With the score tied at 37 after three quarters, the Titans outscored the Streaks by four points in the final eight minutes to win 52-48.

“They (O-G) made a bunch of plays, and that was the difference in the game.

“I had no doubt in my mind that we would compete with them. I wasn’t going to say that we were going to win.

“I just knew that we’d compete for 32 minutes, which is exactly what we did, and as a coach that’s all I could ask for.”

O-G grabbed the early momentum. The Titans smothered the Streaks defensively for a 13-4 lead.

Archbold went to its inside game and leaned on Ashton Kammeyer, who scored five points as AHS was down 16- 10 after one. 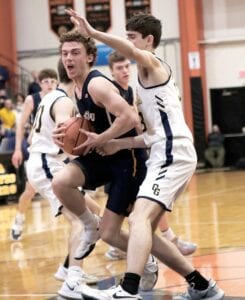 Trey Theobald, a senior, drives the lane against the defensive pressure of Ottawa-Glandorf’s Theo Maag.

“We got a little helter-skelter, which is what they (O-G) wanted,” said Frank. “We didn’t handle it as well as we hoped we would.

“We fought through some contact and tried to play as hard as we could. They made a few more plays than us.”

Brennen Blevins pushed O-G’s lead back to nine with a basket, but Kammeyer converted a free throw and Noah Gomez hit a short jumper to close to within five, 18-13.

Archbold slowed down the Titans’ offense but still trailed 24-19 at the half.

DJ Newman scored the first four points of the second half, pulling Archbold within a point, 24-23, with 44 seconds off the clock.

Owen Nichols canned a three-ball, but Alex Roth matched the Titan with a three of his own.

A Colin White layup pushed the lead back to three, but Newman stepped back and buried a trey of his own to tie the game at 29 with 5:40 left in the period. 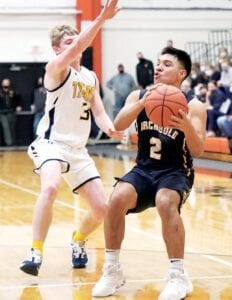 As O-G’s Brennan Blevins (3) tries to get a hand in the way, senior Noah Gomez (2) passes off to a teammate

After O-G scored the next four points, the Streaks, powered by six Kammeyer points, went on an 8-2 run to take their first lead, 37-35, since they were up 2-0.

Nichols scored the final bucket of the third to tie the game at 37 as the teams headed into the final eight minutes.

Archbold stayed on point with its inside game and got a pair of buckets by Kammeyer to lead 41-37.

“He was obviously a huge factor in the game tonight,” said Frank. “He was aggressive. He wanted the ball and posted and he got some confidence in there, and they had a hard time guarding him.”

A technical foul was called on Frank with 4:59 left. Blevins converted one of the two free throws.

Austin Roth answered with a three to give Archbold its biggest lead of the game, 44-38, with 3:59 left.

O-G turned up the defensive pressure over the next three minutes, forcing the Streaks into some costly turnovers that resulted in a 12-0 Titan run. Blevins scored eight of those points to go up 49-44. 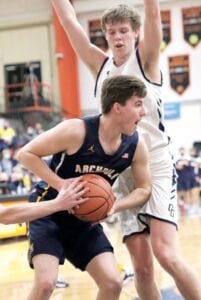 Austin Roth, a 6-1 senior, is blocked on the baseline by 6-7 Owen Nichols.

Newman stopped the run with 1:05 remaining, but the Streaks trailed by three and were forced to foul.

Archbold looked for a good shot but Gomez had his pocket picked, and O-G retained possession.

On the inbounds pass, Archbold got a steal that led to a Kammeyer basket, and Archbold trailed 50-48.

Nichols was fouled again. He iced the win by draining both free throws.

The Streaks could only hope to get fouled on a successful three-point attempt, but Austin Roth’s shot was no good and O-G held on for the 52-48 win.

“I couldn’t be more proud of the group,” said Frank. “After getting beaten like that the first time, to come back and play with them down to the wire– you can’t ask for more than that.

Kammeyer led Archbold with 18 points, while Newman chipped in 15.

The Titans won the rebounding battle, 21-15.

“It all starts with senior leadership,” said Frank. “I had an unbelievably great senior group, and it was all about the team.

“They didn’t care about individual accolades. They just wanted to do what was best to help this team win.

“On the floor they’re top notch kids, and they are going to be a lot more successful off the floor than they were on the floor, and that says something.” 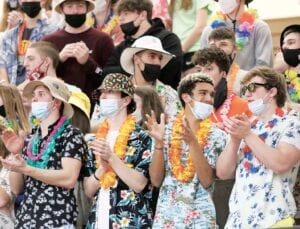 Many in the AHS student section looked like they were ready for spring break at the Div. III regional semifinal between the Streaks and Titans. The high temperature on Wednesday, March 10, was 70 degrees.