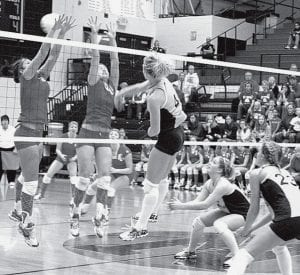 An Adrianne Lange spike flies past the outstretched arms of a pair of Redskin blockers in the Div. III district final at Napoleon.- photo by Scott Schultz

The Archbold volleyball team’s dreams of advancing to the regional tournament came to an end, Saturday, Oct. 27.

Archbold finished with a 23- 2 record and were undefeated champions of the Northwest Ohio Athletic League.

The Redskins (10-15) advance to the regional semifinals tonight, Wednesday, against topranked Huron.

“They’re a nice team. We feel really lucky to play against competition like that, because it makes us better,” said Julie Nofziger, AHS head coach.

Both teams had serving problems in the first game. AHS had three serving errors; the Redskins had four.

The Streaks had a hard time getting into a rhythm and fell behind 12-4.

“We’re used to putting the ball on the floor,” said Nofziger. “We have some bigger blockers and we had to do some adjusting, and they brought back a lot of hits that we had to dig first.

“You can work on that and work on that, but if you don’t play teams that make you do that, it’s tough to prepare for that. It was very difficult for us to get into a rhythm and get going.

“We just had some weaknesses today, and they took advantage of them.

“They played great defense. We knew where the holes were, and then they put their big blockers there, and we couldn’t go through them.”

Archbold closed to within six points at 14-20 when St. Henry called a time-out. On the next play, 5-foot-11 Chelsey Kremer stopped the Blue and Gold’s five-point run with a kill.

AHS took a 12-11 lead in the second game with a Devin Newman kill, but St. Henry tied the score at 12 with a Buschur kill. The Redskins led 22-13 when Nofziger called a time-out.

Kills by Dani Newman and Emily Snyder, along with a Stacy Wyse defensive save and a double block by Wyse and Snyder, closed the gap to 23-19.

With St. Henry leading 24-19, Adrianne Lange’s kill closed the gap to 24-20, but an AHS net violation secured the game for St. Henry.

The Redskins were in control the entire third game, jumping out to a 7-1 lead and extending it to 16-6 before AHS started its comeback. The Streaks closed to within six points and were down 16-22, but Buschur’s kill stopped the run.

Dani Newman’s kill closed AHS to within five, 19-24, when Heidi Link’s kill sealed the game and match for St. Henry.

The loss ended the season of four AHS seniors.

“Dani Newman and Adrianne Lange have been our power hitters all along. It’s going to hard to replace them next year.

“It’s going to be tough to try and find people to go in there and play with the intensity” those four seniors did.

“We will look to some good things next year,” said Nofziger. “They’ll want to try to defend that NWOAL title, now that they have it again, so they’ll work hard at it.”

The Streaks defeated Swanton in three games in their Tuesday, Oct. 23 district semifinal.